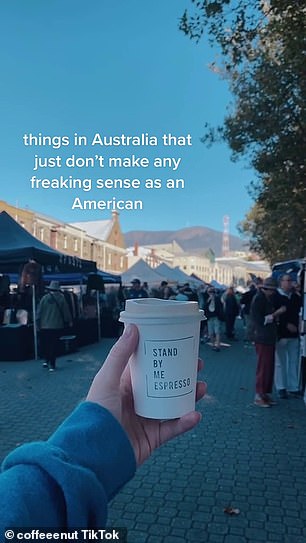 American expat says bagels in Australia are dull and dense

American Expat Reveals the ONLY ‘Sad’ Truth She’s Noticed Since Living in Australia: ‘It Makes No Sense’

An American expat has revealed the ‘sad’ truth about life in Australia that ‘makes no sense’ to her.

TikToker Ashleigh, who goes by @coffeeenut online, moved from New York to Tasmania for college and noticed bagels Down Under tasted different than in the US.

In a short video, she said: “Things in Australia that really don’t make sense to an American who just moved – bagels, moving on.”

She says Australian bagels are “so sad and dense”, but she loves the cafe culture.

In the United States, bagels are a popular breakfast option that is often topped with cream cheese and butter.

But Australians prefer bacon and egg rolls or avocado on toast with coffee first thing in the morning rather than a bagel.

The short video has since gone viral and has been viewed 1.2 million times with hundreds of comments.

Some expats have agreed and say they struggle to find decent bagels in their cities, but others said Melbourne and Perth are full of bakeries that sell delicious bagels.

“Melbourne is covered in bagel shops, a few suburbs have a large Jewish population with large family bakeries!” one person wrote.

“As an Australian who has visited America many times, you are right!” You do bagels better,” another wrote.

Despite the differences between the United States and Down Under, Ashleigh said she made “a good choice” in moving internationally.

In other videos, Ashleigh said she was also confused by Aussie Street parking signs and power outlet switches.

4 dishes we loved this week, from Fries, Zoku and more