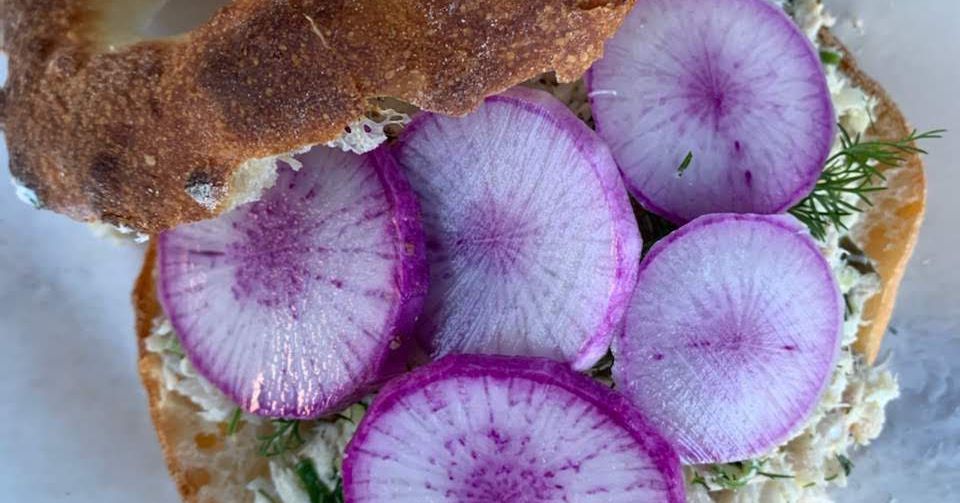 On Sunday, March 13, Asa Diebolt reopened Asa’s Bakery in its new location on 34th Avenue in the Nokomis neighborhood of Minneapolis. Diebolt got its start a few years ago selling to bagel-hungry Midwesters at subway farmers’ markets — its hallmark is dense, chewy, Coastie-approved bagels and bialys. (Bialys are do not bagels, although they may look similar – they’re just baked, not boiled, and have a sunken center filled with roasted sweet onions.)

Diebolt sold out quickly on Sunday – some loyal customers lined up for an hour to get their first bite. Regular hours begin this week: Thursday and Friday from 7 a.m. to 2 p.m. and Saturday and Sunday from 8 a.m. to 2 p.m. Masks are required to enter. Currently, Asa’s is take-out only, but outdoor seating will be available in warm weather.

Ties Lounge & Rooftop held a grand opening ceremony at its Nicollet Mall location on March 12 and followed it with drinks, DJs and a fast-casual Italian menu from Joey Meatballs. The trio behind Ties – Stevie Moman, Tommy Joyce and Gene Sanguma – are Gen Z entrepreneurs who got their start, according to Mpls.St.Paul Magazine, doing party promotions for local spots like the Pourhouse and Crave. They teamed up with Levi Strowder to bring Ties downtown. The mission of the trio is multiple: to help revitalize the city center, to create a welcoming nightclub, to bring people together around music and food. Each of the four floors offers a different experience: a jukebox space for families, a lounge with cocktails and beers, a food space with Joey Meatballs and a basement with a “premium” experience. The owners bottom line is inclusiveness – they want everyone to show up. Hours are Monday through Tuesday 11 a.m. to midnight and Wednesday through Sunday 11 a.m. to 2 a.m.

Adam Gorski leaves Minneapolis for a new role in Bayfield

Adam Gorski, who ran Sooki and Mimi’s bar with a tantalizing drinks menu, is leaving town for Bayfield, where he will be the new food and beverage director for The Wild Rice Retreat, reports Mpls.St.Paul Magazine. Years ago, Gorski was head bartender at La Belle Vie, one of Minneapolis’ most acclaimed fine-dining restaurants. He left to lead the beverage program at Ann Kim’s restaurants, first at Young Joni, then at Sooki and Mimi. Gorski is one of the biggest names in the Twin Cities bar scene: his creative and thoughtful cocktails leave a legacy of their own.

Sen Yei Sen Sen Lek and Dipped Debris — sister restaurants and cornerstones of the Central Avenue food corridor in the northeast — announced their closure in late February. But there is still plenty of time to catch pad kee mao or catfish po’boys. Both restaurants are waiting until April 23 to close: co-owners Holly and Joe Hatch-Surisook are ‘BIG FANS’, they wrote on Facebook, good farewells from Minnesota; Read more on Racket. In Uptown, the Pourhouse has closed indefinitely, taking the neighborhood’s nightlife options down a notch. Minneapolis/St. Paul Business Journal has the full story.

Skinny Pancake gets a warm welcome in downtown Albany