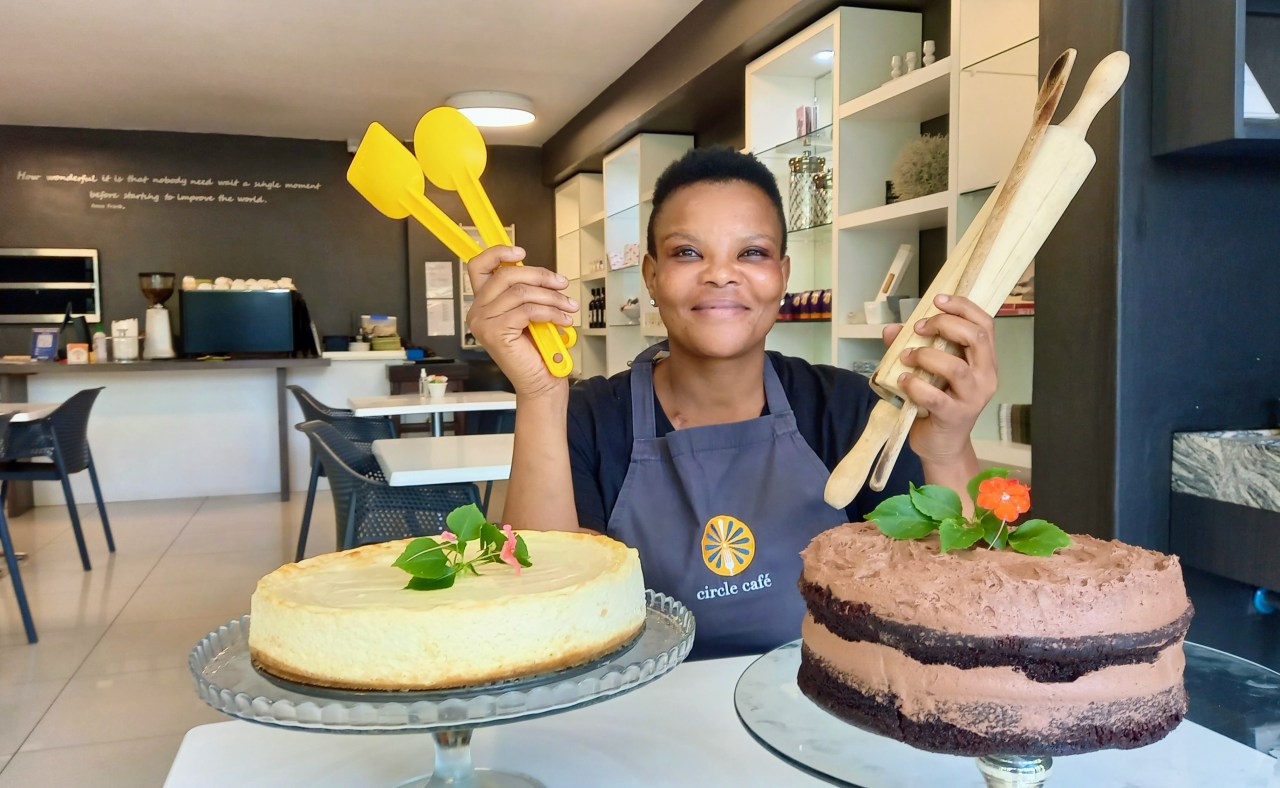 Bagels, blintz and the best cheesecake in Durban

How to write this story to make it both tasty, given the focus on food and an unusual restaurant in Durban, and at the same time heavy – in contextual and non-caloric terms – given the rationale of this unique little restaurant?

One thought was to start with the three Shabbat dinners. My only invitations to Shabbat dinner. Asked not too long ago by a friend who once in a while hosted what I consider to be wonderful Friday night “events”. She would invite good company, like the people she loved, to eat the many dishes she had spent the day preparing and drink what we brought and added to her stash. The conversation, inspired and led by her, was always interesting, lively, and the evenings satisfyingly long.

During these evenings, we shared with her, all seated around the dining room table, and without further ado, the lighting of candles, the breaking (eating) of challah bread and various observances, as was his tradition. In a world where the rituals of “religion” can be so exclusive, pedantic and proselytizing, I was grateful – remain grateful – for the non-invasion and inclusiveness of these gatherings.

Another idea was to start with a decorator. Canapes, comfort, cookbooks, cheesecake. Legendary cheesecake. By reputation, the best in Durban. ‘Cause it all comes to mind, thinking about The Coffee Circle, a haven of tranquility less than five minutes away, strolling at a gentle pace, from where the sightseeing Rickshaw double-decker bus departs from the city’s North Beach Visitor Center. Also blintzes, blinis and potato latkes. My breakfast latke last week, at Durban’s only kosher restaurant, served with avocado, cream cheese and an egg.

Oh. And boxed Friday Shabbat dinners to order in advance, these introduced during Covid. Hearing about it brought back those Shabbat dinner memories.

My third option was to start at the point where I am seated behind about 40 Durban High School students, in uniform, who are seated in rows facing a screen. “We are a center of memory”, Claudia Blythe, head of education at Durban Holocaust and Genocide Center (DHGC), tells us everything. Then he said, “If I ask you, what is genocide? What does that make you think of? There are hesitant comments. Rwanda is mentioned. “And what comes to mind when you hear ‘Holocaust’?”

The DHGC opened its doors in March 2008, smaller at the time and housed in Durban Jewish Club aka Durban Jewish Center. It expanded in 2011 to become his current permanent home, in a renovated section in the same location. DHGC is home to the Circle Café, which, like my friend’s Shabbat dinners, is welcoming and inclusive. On sunny days, when the café’s large glass doors are wide open, the breakfast and lunch venue opens onto a garden of remembrance. This has a jungle gym for the kids, a water feature and feels like an oasis of harmony.

Guess I should divulge at this point and put my head down… While I’ve been to the cafe several times, often indulging in cheesecake and their blintzes, I met my friend there who will only be driving from Umhlanga Rocks and will cross the great gap of the Umgeni River if Circle Café is our meeting place, I haven’t ventured further. I escaped here from the crowded waterfront for peace, coffee and quiet writing. But last week was my first time inside the DHGC museum, which is world class, indeed, in every way. A place of remembrance for the six million Jews who died in the Holocaust and all the other victims of Nazism; as Blythe tells the boys, “the most documented genocide”.

With an expressed “never again” commitment and an extensive education program, the DHGC focuses on human rights abuses and, of course, apartheid. There is a photo of Nelson Mandela at the entrance to an Anne Frank room, where Mandela’s message reads: “During the many years my comrades and I spent in prison, we were inspired of the courage and tenacity of those who challenge injustice even under the most difficult of circumstances… Some of us have read Anne Frank’s diary on Robben Island and have drawn much encouragement from it.

Okay. So now you might have an idea of ​​my aforementioned dilemma of where and how to start this story, given the different facets. And we can take it from there.

Two weeks ago was my first time back to the Circle Café since you-know-what started when that first hard lockdown shut them down for five months. Then, get back to the action with a reduced menu and a few take-out additions, the Shabbat box people order through Facebook or Instagram posts (the weekly menu) being one of them.

The cafe previously had a well-organized decoration and gift section. Now gone.

“Mary Kluk’s vision from the start (Kluk is the director of DHGC) was to have the museum, a kosher cafe that everyone would love, and a gift shop,” says cafe manager Carol Strous.

Lining the shelves is now a library of cookbooks. Some are leftovers from the old gift shop stock, she says. Many have been donated. The range, to browse and be inspired, is eclectic and vast. Jamie Oliver of course. Ina Parman. Marlene van der Westhuizen. Madhur Jaffrey. A monster Gastronomic Larousse in the well-represented French section alongside a tantalizing Italian culinary collection. Thailand there? Sure! California and Alice Waters are represented by a In Panisse recipe book. Titles including The Taste of Morocco and the Aromas of Aleppo.

Yes, and a Taste of Israel; and Claudia Roden The Jewish Cookbook. And Strous lends me a leafy copy of a cookbook called Class act: eating elegant, easy to make, by mother-daughter cooking and teaching duo, Judy Druck and Linda Nathan. The same Judy Druck who devised the recipes, oversaw the kitchen until shortly before Covid and created the Circle Café menu.

A menu that includes all-day breakfasts, like the breakfast bagel with both halves stacked with tomatoes, fried onions, mushrooms, shredded cheese and scrambled eggs. The selection of three egg omelettes where you can choose your filling. Sarmys grilled, crispy and “you can taste the butter”, says my friend who opted for the egg mayonnaise.

Fish, fried or grilled and served with chips, is the most popular menu item, Strous says.

“All hotels know we have kosher cooking, as do hospitals and conference centers, so if they have kosher guests, they’ll order us.”

A popular item now off the menu is corn fritters. “Cost,” says Strous. “We are increasing, adding items, as things improve.”

It is a milk kitchen. “We don’t have meat in the kitchen. Otherwise, we would need two separate kitchens, one for meat and one for milk. Kosher requiring that meat and milk are never combined, separate utensils are used for each, and a waiting period is observed between eating them, among other things.

Machgiach is not a career term I encountered when I worked as a school counselor a long time ago. In fact, it only happened, for the first time, when I asked Strous about the dynamics of kosher cooking. “The mashgiach (who must be Jewish and observe the Sabbath; the cafe is closed on Saturdays, open on Sundays) must come every day, in the morning, to wash the lettuce. He holds it up to the light to check that there are no insects. Ah. Me at.

Strous tells me they get their challah bread for the Shabbat box from Pick n Pay Musgrave. “He owns the only kosher bakery in Durban. the mashgiach goes there too. He would sift the flour. We can do it here ourselves. As long as what we use has the kosher seal, it’s fine.

Pumie Tshapa is the baker at the Circle Café. In the kitchen since the cafe opened, she had studied food preparation in a TVET College at Cato Manor, then previously worked in the kitchen at Suncoast Casino.

About 10 years ago, when Druck asked if anyone would like to train as a baker and take over the bakery, Tshapa raised his hand. And has been doing it ever since, with commitment and enthusiasm. (She tells me she loves it.)

She makes the cheesecake with her Tennis biscuit base, baked for 20 – 25 minutes, “depending on the oven”. The moist carrot cake, where a can of crushed pineapple is one of the once secret ingredients. Stuffed Monkeys, which I had never heard of but apparently everyone has, where she spreads the buttery, rich cookie dough with jam and raisins, rolls, cups and pastries.

To eat himself, chocolate cake is his favorite. Among those who stop is chocolate and cheesecake, neck and neck.

The DHGC is a place of learning, reflection and memory. The museum is dedicated to creating a more caring and just society in which human rights and diversity are respected and valued. The cafe’s focus, Strous says, is on simple food. Fresh and generous. “Good food that happens to be kosher.” All encircling many good reasons to be. DM/TGIFood

When is pancake day? When does Lent begin and why we celebrate it