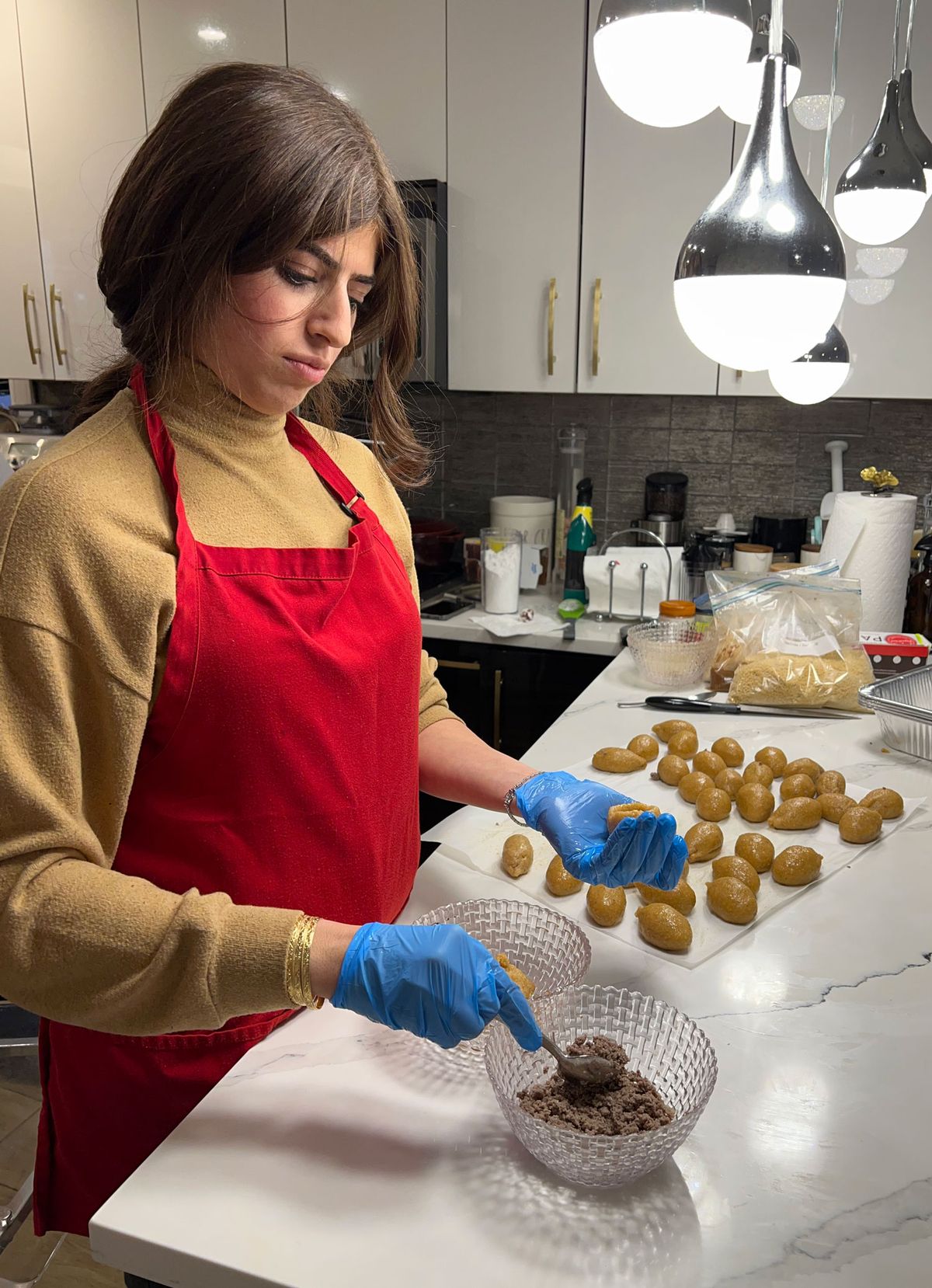 My relationship with Judaism has always revolved around food. While my family didn’t go to synagogue much, our festive meals were our most significant expressions of Judaism. Friday night Shabbat dinners were sacred. I’m half Sephardic and half Ashkenazi, so our table would be filled with foods from both halves of my identity: laham bijeen and kugel, kibbeh and rugelach. Tearing up in a cool challah on the Friday night after the blessings and waking up to the scent of fresh bagels on the Saturday morning are some of my fondest memories.

So what happens when you are not allowed to eat the foods that you cherish the most?

I was almost 30 when I discovered I was one of the 1.8 million people in the United States with celiac disease, an immune disorder triggered by eating gluten. It’s one thing not to be able to grab a slice of pizza around the corner, or a bagel at the deli. But not being able to eat the foods that are so much a part of your religion and culture? I was devastated and determined to find a way.

I went hunting, determined not to be excluded from the traditions of my culture, and found Esther Anzaroot, a local chef who would recreate the Syrian mezze (appetizer) that I missed so much, gluten-free. I was hosting my family for Shabbat and was delighted to finally be able to offer the same foods that I ate growing up. And it didn’t taste or feel any different at all.

Anzaroot’s parents were from Aleppo, Syria, and immigrated to Virginia. After the death of her father, her mother moved the family to the Syrian community of Brooklyn. While running her sister’s clothing business, her hobby was cooking.

Six or seven years ago his son brought his girlfriend home and announced that she was gluten free. â€œEverything in our culture is food,â€ Anzaroot said. â€œIt’s so important to us. I had to find a way for her to eat our food. So I started to experimentâ€¦ I had no idea it would turn into a business.

Anzaroot was able to introduce her future Ashkenazi daughter-in-law to her family’s Syrian culture through gluten-free versions of kibbeh, laham bijeen, sambusak, and more. Then people in her Brooklyn community heard about what she was doing and the orders started pouring in. She sold her delicacies to families, supermarkets and local restaurants.

â€œPeople would stop making mezze for their families because they felt bad leaving out those who couldn’t eat gluten,â€ Anzaroot said. â€œWe helped them bring him back. It is so important that people can enjoy their culture and ethnic foods. Everyone wants to feel like they are like everyone else and that they belong, and we can help them feel that way.

Recently I spent a day cooking and eating with Anzaroot. We talked more about how she recreates recipes, while we cooked kibbeh, one of my favorite dishes from my childhood, which I thought I would never be able to eat again. While the dish is traditionally made from bulgur wheat, Anzaroot spent months experimenting with different textures before creating his own rice flour mixture for the husk. As she taught me how to pinch and turn the shell, she told me how her business started when she was researching recipes for her son’s girlfriend: her daughter went to a friend’s house in Miami who had a family recipe for gluten-free sambusak. Esther adapted the recipe and attributes this moment to her belief that she could recreate other traditional Syrian gluten-free recipes. â€œI owe it to Elayna,â€ she said. I gasped. It turns out that Elayna is my first cousin, and the recipe she considers the origin of her business belongs to my Aunt Pnina in Israel. So here I am standing in a stranger’s kitchen, learning my own family’s recipes.

I watched Anzaroot’s hands as she quickly and effortlessly formed a perfectly formed kibbeh. â€œIt takes years of practice,â€ she said, glancing at my oddly shaped designs. Together we heated the oil while we soaked the kibbeh, waiting for it to take on a perfect golden hue, signaling that it was ready. I couldn’t wait to taste them, as I bit into an overly hot kibbeh for the first time in years. â€œThese taste exactly the same as I remembered,â€ I said, as I continued to eat two more.

After years of selling her homemade gluten-free mezze, Anzaroot took it to the next level and enrolled in Brooklyn’s Kosher Culinary Center to hone her craft. It is there that she meets Lily Mishan Nissim, who will become her partner.

They were working in his house, then needed a commercial kitchen. So they rented a space at the Kosher Culinary Center where they met. Orders for Anzaroot’s creations began to arrive from Chicago and Baltimore, far from the Syrian community of Brooklyn that she used to serve. But there was a limit within its reach, because not everyone knows the Syrian mezze.

â€œThat’s when I decided to pivot my business and give people the autonomy to make gluten-free products their way,â€ she said, noting that they were planning to launch their business, Gluten Free Easy, in early 2022. They used to sell ready-to-serve gluten-free mezzes; now they are going to introduce a line of frozen, raw and gluten-free pasta that will allow customers to create their own dishes. â€œOne of my products will be gluten-free puff pastry. Hope this inspires people from all cultures to cook the ethnic food they love and miss the most. For some, it could be an egg roll, a napoleon or a boureka.

Dani Secemski, owner of Glatt Express in Teaneck, New Jersey, has purchased many gluten-free creations from Anzaroot and is eagerly awaiting the launch of their new products. â€œI saw Esther’s products and contacted her because they were super unique and we needed them. Every week we were selling all the items, people were buying 10 pieces at a time. The demand is crazy!

I couldn’t believe I had finally found a bagel that tasted like real.

â€œI joke that I’m the first person families call when they come back from the doctor after being diagnosed with celiac disease,â€ Anzaroot said. â€œI am so happy to be able to help them. People say ‘Esther, without you we wouldn’t have eaten any of our traditional foods.’ “

Anzaroot and Mishan aren’t the only ones recreating gluten-free Jewish cuisine.

In search of a good gluten-free bagel, I stumbled upon Modern Bread and Bagel on the Upper West Side of Manhattan. Read about the opening and stood in line for over an hour in 2019 when I was seven months pregnant. Until then, I had never had a gluten free bagel that tasted really good. I remember sitting on a bench outside the restaurant, devouring my bagel, lox, and cream cheese. I couldn’t believe I had finally found a bagel that tasted like real.

Orly Gottesman created Modern Bread and Bagel after her husband, the son of bagel makers, was diagnosed with celiac disease just a few years after their relationship began, and she saw a void in gluten-free offerings in New York. â€œAt the time, I wasn’t a baker and I wasn’t interested in making a career out of it,â€ she said. “But we were living in Paris because of Josh’s job, and I didn’t have a work visa, so I took French pastry classes and very quickly learned that I had a talent for pastry. . “

She knew it was something she was passionate about. So she ended up applying to Le Cordon Bleu culinary school to find out more. It was during her culinary studies that she learned that you can’t use the same flour mixes for gluten-free cakes and breads, so she created Blends By Orly, a line of gluten-free flour mixes.

â€œEventually we went back to the States and saw a bagel store for rent in Manhattan,â€ she said. â€œI was selling my flour mixes, but no one could really do what I could do the way I could. We knew we had a killer bagel recipe, great gluten-free flour, and knew what we wanted wasn’t there.

In 2019, Gottesman and her husband opened their own gluten-free restaurant where they serve bagels, grilled cheese, freshly baked bread and other items that people like me have just learned to live without.

â€œWe wouldn’t be who we are without our bagels,â€ Gottesman said. â€œFor so many people, a big part of their childhood was bagels on a Sunday morning. They miss that experience, so when they try our bagels and are finally able to get them back, it makes them cry. “

Apparently, I wasn’t the only one obsessed with their perfect gluten-free bagel. Modern Bread and Bagel has become the exclusive supplier of gluten-free bagels to Black Seed Bagels, another bagel store with multiple branches in New York City.

â€œBlack Seed Bagels became synonymous with great bagels, so it was important that we partnered with a gluten-free bakery that not only cared about providing New York City with truly gluten-free products, but also about not compromising on quality â€said Dianna Daoheung, Culinary Director and Partner of Black Seed Bagel. They chose Modern Bread and Bagels to be their supplier of gluten-free bagels and now, she said, they’re struggling to keep up with demand. â€œTo this day, I am still blown away by the closeness to a traditional bagel. “

Modern Bread and Bagel is slated to open another location in Chelsea in early 2022, followed by a location in Los Angeles by spring.

Beyond business success, Gottesman believes her restaurant and products give meaning and purpose to the community it serves. Her business has rave reviews and tons of loyal customers who couldn’t participate in the joys of eating otherwise. Ranit Librach, whose 8-year-old daughter has celiac disease, told me, â€œMy daughter loved challah and couldn’t wait to eat it at every family party. We struggled to find delicious gluten free challah until we tried the modern bread and bagel. Now we buy one and bring it to every family vacation and my daughter is really able to feel that she is part of our traditions and celebrations.

From bean hamburger to next level mushrooms to Funfetti Pancake cereal: our eight best vegan recipes of the day!