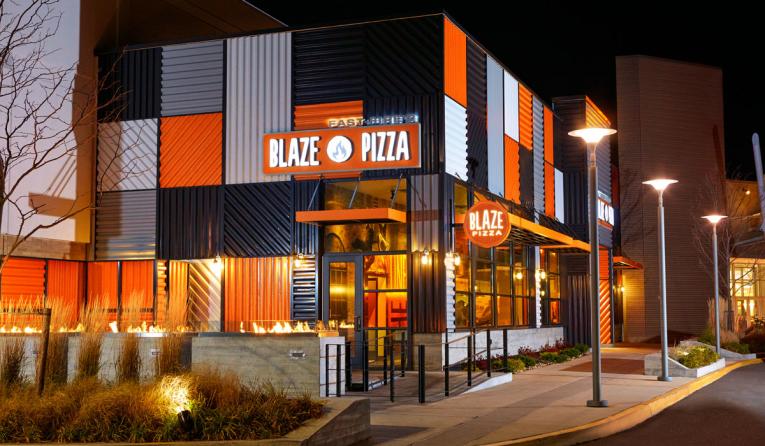 Blaze Pizza announced today that it has signed two new multi-unit franchise agreements to expand its footprint on the West Coast, further fueling the continued growth efforts of the flourishing brand nationwide. As part of these signing agreements, Blaze is expanding its strong presence in Southern California with two restaurants under development that should open up new markets for Indio and Colton for the brand in its home state. In addition, the brand also signed an agreement to open its first locations in Alaska, with four restaurants in development across the state, with an initial focus on Fairbanks.

Blaze Pizza‘s new franchisees, Greg and Catharine Persinger, will own and operate the brand’s stores in Alaska, spearheading its early days in the state. The Persinger’s are experienced multi-brand developers, and in addition to their new deal with Blaze, the couple also own successful franchises Firehouse Subs and Cold Stone Creamery. The husband-and-wife team plan to open four new Blaze Pizza stores statewide, with the first scheduled to open in Fairbanks.

Brother and sister duo Aman and David Chandi lead the development of Blaze Pizza in Southern California. The siblings come from a family with strong roots in multi-unit franchise operations and real estate development, currently operating several Del Taco and Subway franchises in the Golden State. Leveraging their extensive experience in the restaurant and franchise industries, Aman and David plan to develop two new Blaze locations in Indio and Colton, Calif., Both of which will open in shopping malls owned by the Chandi family.

â€œFor over ten years, we have worked closely with our family to learn more about the franchise industry and have seen first-hand the importance of investing in a concept with proven viability. Blaze Pizza has been a pioneer in the made-to-order foodservice segment, and once we were introduced to the exceptional team behind the brand’s unmatched support system and product excellence, we immediately grasped the opportunity to add it to our portfolio, â€said Aman. Chandi. â€œBlaze Pizza has attracted a passionate consumer audience nationwide; in fact, we loved the brand first as customers, and we are thrilled to have the chance to share the unique culinary experience of this concept with our community.

Building on the momentum the brand has cultivated throughout 2021, these latest deals are fueled by the continued success and growth that Blaze Pizza has enjoyed since the start of the year, with a strong active pipeline positioning the popular franchise concept for further expansion. To support these aggressive development efforts, Blaze continues to invest in a strong franchise leadership team, recently appointing Andrew Verhagen as franchise sales director and John Grega as construction director. Together, the new team members have extensive franchise experience and have worked with nationally recognized food brands including Bojangles and Inspire Brands.

â€œAt Blaze Pizza, we pride ourselves on being true partners for our franchisees and have continually invested in our leadership team to ensure that we have the best of the best at the helm of this growing brand,â€ said Ed Yancey, vice president of franchise. development for Blaze Pizza. â€œAndrew and John are the latest industry veterans to join our team, and we have no doubt that their wealth of knowledge will be an invaluable resource for new and existing conservators of our system. We look forward to leveraging the expertise of our team as we continue to accelerate our growth efforts and drive the expansion of Blaze Pizza through strategic franchise development.

The news and information presented in this press release has not been corroborated by QSR, Food News Media or Journalistic, Inc.