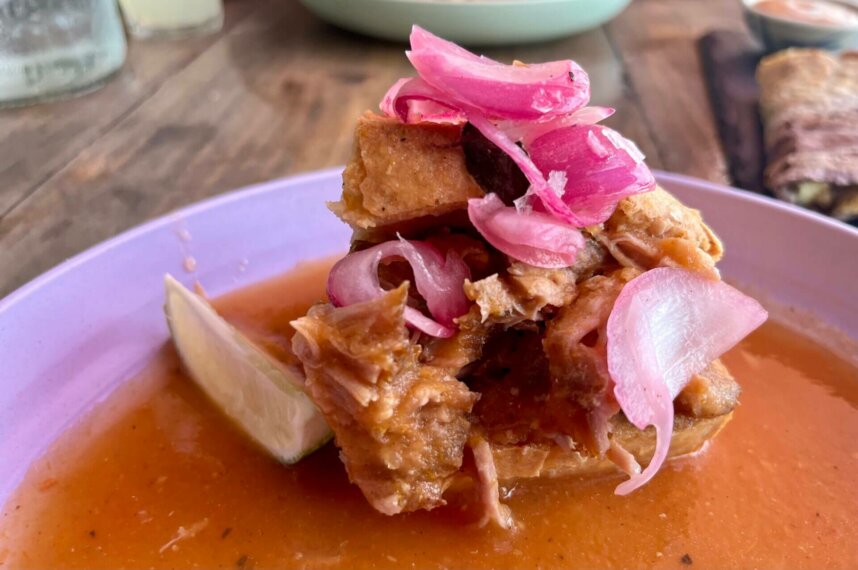 This month of June, wouldn’t it be nice if we all had a real summer holidays? We could all enjoy a few months of aimless bike rides, but these days most of us have to intentionally find ways to set our summer adrift. This column gives me an excuse – and hopefully gives you inspiration – to wander the hot streets of Brooklyn (and beyond!) and stumble upon things we didn’t know we needed: hangover cures from Guadalajara to Prospect Heights; heaps of crispy Filipino pork and big purple milkshakes at Carrol Gardens; burgers shaped into funny faces at amusement parks. Follow me, my friends! Summer 2022 has only just begun!

Sandwich of the summer!

My summer sandwich is a torta ahogadaa hard-to-find “drowned sandwich” outside of the city of Guadalajara in western Mexico. Chef Hugo Orozco, formerly of the once-beloved (and now closed) Slowteria Carroll Gardens restaurant, pays homage to his childhood home with this salty, messy sandwich, said to relieve a hangover or whatever else might be plaguing you. To his new restaurant Prospect Heights, Cruz Del SurOrozco prepares its own birota super crispy sourdough bread, the stuffing of carnites (or earthy, umami-rich grilled oyster mushrooms, as a delicious plant-based alternative), and serves it in a pool of smooth, juicy tomato broth, with a fiery little bowl of chile de árbol sauce and pickled red onions on top. The cool temperature of the broth allows the bread to absorb flavors without falling apart – it also makes the sandwich refreshing on a hot day.

Orozco has also spent time cooking in Tulum, and he brings sultry beach vibes to the table in an incredible dish that’s seriously undersold on the menu as a simple “jicama fruit salad.” I still dream of the thin slices of jicama and pineapple artfully layered with ribbons of cucumber, pieces of jalapeño and rings of red onion. Delicately sliced ​​fruits and vegetables provide the backdrop for an abundance of colorful, seasonal delicacies, many from the garden of the chef’s father-in-law: velvety golden squash blossom petals, crunchy salty nuggets, peppery red radishes, cross-cut oranges. thus their marrow becomes asterisk, spicy and prickly mizuna leaves, luscious purslane, tiny purple flower buds and yellow-green bites of romaine. The whole thing is dusted with rusty red chili powder, balancing all the sweetness and freshness with the heat.

Pair it with a mangonade cocktail, enriched with tequila and more chilli, or sip cold brew horchata, the cinnamon-dusted rice milk hitting all the right notes in a tall glass of iced coffee. You won’t want to miss the handmade tortillas, so maybe order a Birria taco or a chicharron quesadilla, and maybe a little creamy lime pie, served in a glass jar for dessert, not because you’re still hungry, but because you want to linger a little longer in Cruz’s covered courtyard Del Sur, at a well-worn picnic table among ivy, roses and potted tropical plants.

A new lease on brunch

FOB’s Tosilog is here to shake up your brunch routine. Photo: Kara Zuaro

Are your brunches in Brooklyn starting to feel a bit the same? If you’re looking for an alternative to your avocado toast, you need to check out FOB, a hidden gem tucked away in an unassuming storefront on Smith Street. If you’ve ever been there, you’ve probably seen a bunch of empty tables, which isn’t a good sign, until you realize everyone is hanging out in their tented tropical garden. Their Filipino brunch includes a selection of deeply flavorful grilled meats served with garlic rice and a fried egg. I’m a fan of tocino, thinly sliced, sweet and salty, crispy and chewy marinated pork – basically, a bunch of bacon on a trip to the Philippines – with a tangy vinegar-based sauce on the side. If you prefer something sweeter in the morning, their Halo Halo waffles are topped with red beans, jackfruit, gloriously purple ube ice cream, fresh fruit and shredded coconut. Wash everything with a colorful jerk—ube purple with coconut pearls, golden mango with grass jelly, or green avocado with tapioca.

The Food Nerd’s Guide to Disney

At Friar’s Nook in Disney World’s Magic Kingdom, you can order a Wild Toad Brat Burger that’s staring at you. Photo: Kara Zuaro

Anyone heading to the hell that is Orlando this summer? Here at Brooklyn Based, my colleague Meredith Craig of Pietro has already written extensively about how to visit Disney World and Universal Studios without losing your mind. Meredith was not at all impressed with the deliciousness of Disney food, so when I brought my kids last month, I was on the hunt for the funniest, craziest fare we could find. The Wild Toad Brat Burger with Olive Eyes and a Pickle Tongue Does the Trick for Silly Food (and that’s definitely how I’ll be serving burgers at my next kid-friendly BBQ). You can’t survive a trip to the Magic Kingdom without eating, so if you’re planning a trip, I’ve shared some hard-earned tips on booking tough tables and gloating at club-level restaurants in my The Food Nerd’s Guide to Disney in my personal blog, Brooklyn DoubleLargewhich usually focuses on hanging out in the Catskills.

From farm to peoplethe locally sourced grocery delivery service, opened a kitchen and bar in its warehouse in Bushwick.

little rascal opened in Greenpoint with a menu of Mediterranean mezze and complicated cocktails, like the Cosmic Debris, made with bourbon, lemon, Fruity Pebbles and pistachio cream. (Maybe I should try!)

Arden took over the former Glady’s space in Crown Heights and serves wood-fired specialties including grilled oysters with lots of fixin’s: bacon, gochujangworchestershire, green onions and a crumble of Ritz crackers.

Slate roof is now open at the top of the Pod Hotel in Williamsburg. They serve snacks to share like Philly cheesesteak empanadas and run down the frosé.

Can I cook frozen pizza in an air fryer?