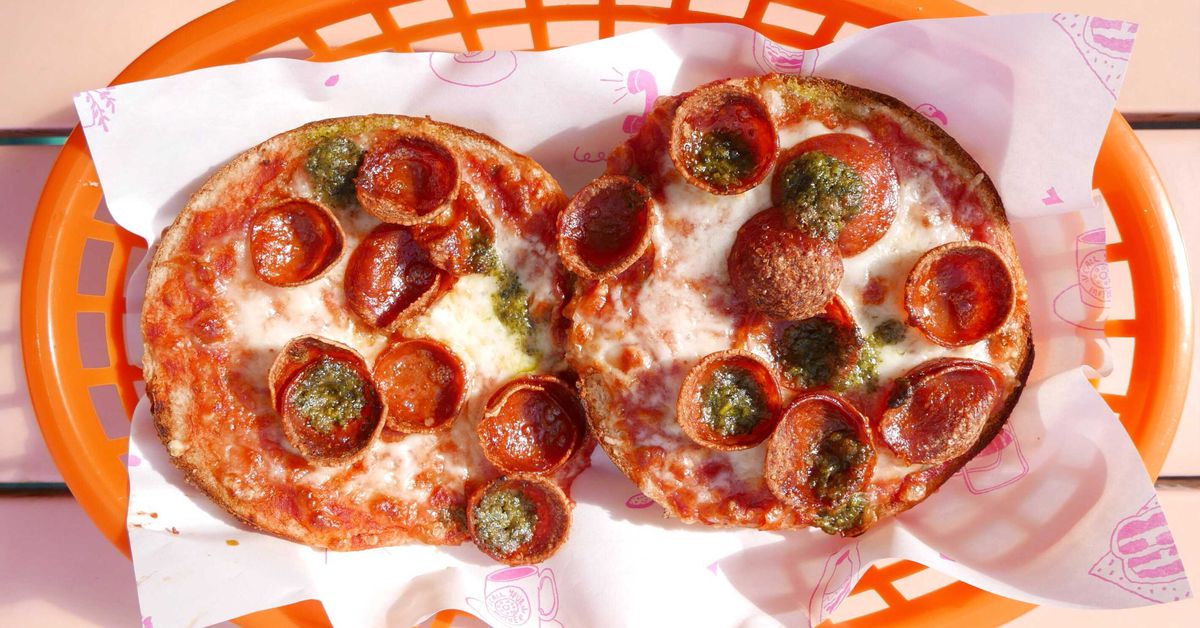 Hit “Jewish-ish” Deli Call Your Mother is dropping dinner tonight for the first time in its three-year history, tasking its North Bethesda location with testing the third meal.

The months-old Call Your Mother’s store at the Pike & Rose complex (11807 Grand Park Avenue) is rolling out the new evening menu on Tuesday, March 1. Dinner is served daily from 4 p.m. to 8 p.m., for dine-in, take-out and delivery. Breakfast always starts at 8:00 a.m.

Pastrami beef brisket tacos and pizza bagels, which made brief pre-pandemic appearances at CYM’s flagship Park View, show up for dinner at Bethesda alongside hot new subs, a tuna fondant on rye, latkes and its popular breakfast sandwiches served in colorful basket dishes. That means CYM’s wood-fired bagels are available for the first time at night (most of its six stores close at 2 p.m.).

The large size of the months-old location (2,300 square feet) makes it an ideal site for dining and experimenting with new dishes, says co-founder Andrew Dana. A section of hot sandwiches, topped with American and cheddar cheeses, herb mayonnaise, pickles and jalapenos, is served on a homemade sub roll. Dana describes the hybrid bread as “if the bun and Challah had a baby”.

“The Jet Ski” loops in brisket and pastrami, while smoked turkey is the star meat of “The Manatee.” Another hot sub comes with cauliflower and latkes. The same ingredients reappear in a trio of tacos served on homemade corn tortillas.

Pending approvals, look for booze soon (another CYM first) at Bethesda. There are no plans yet to roll out Dinner to its other locations. As office (and real-life) parties begin to make a comeback, CYM has just unleashed catering capabilities for the first time.

Co-owners Dana and 2017 Eater Young Gun Daniela Moreira launched the successful bagel brand at Park View in the fall of 2018, earning a spot on Eater’s 16 Best New Restaurants in America the following year.

During the pandemic, Capitol Hill, Georgetown, a Bethesda pink bagel cart and Pike & Rose venues followed. The sixth DC-area store opened this year at Yours Truly DC’s West End hotel. In total, Dana says CYM makes and sells 13,000 bagels a day on weekends. One of its weekend customers is President Joe Biden, who stopped by the Georgetown store after Sunday mass just days after its inauguration.

Dana narrowly missed Biden that day, but he was able to hand-deliver an order to former President Barack Obama. He likes his bagel plain and toasted with butter, says Dana.

“He’s as kind and funny and charismatic as you’d think, if not more,” he says.

Personal loans may help you pay off $10K worth of credit card debt 10 years faster: Here’s how