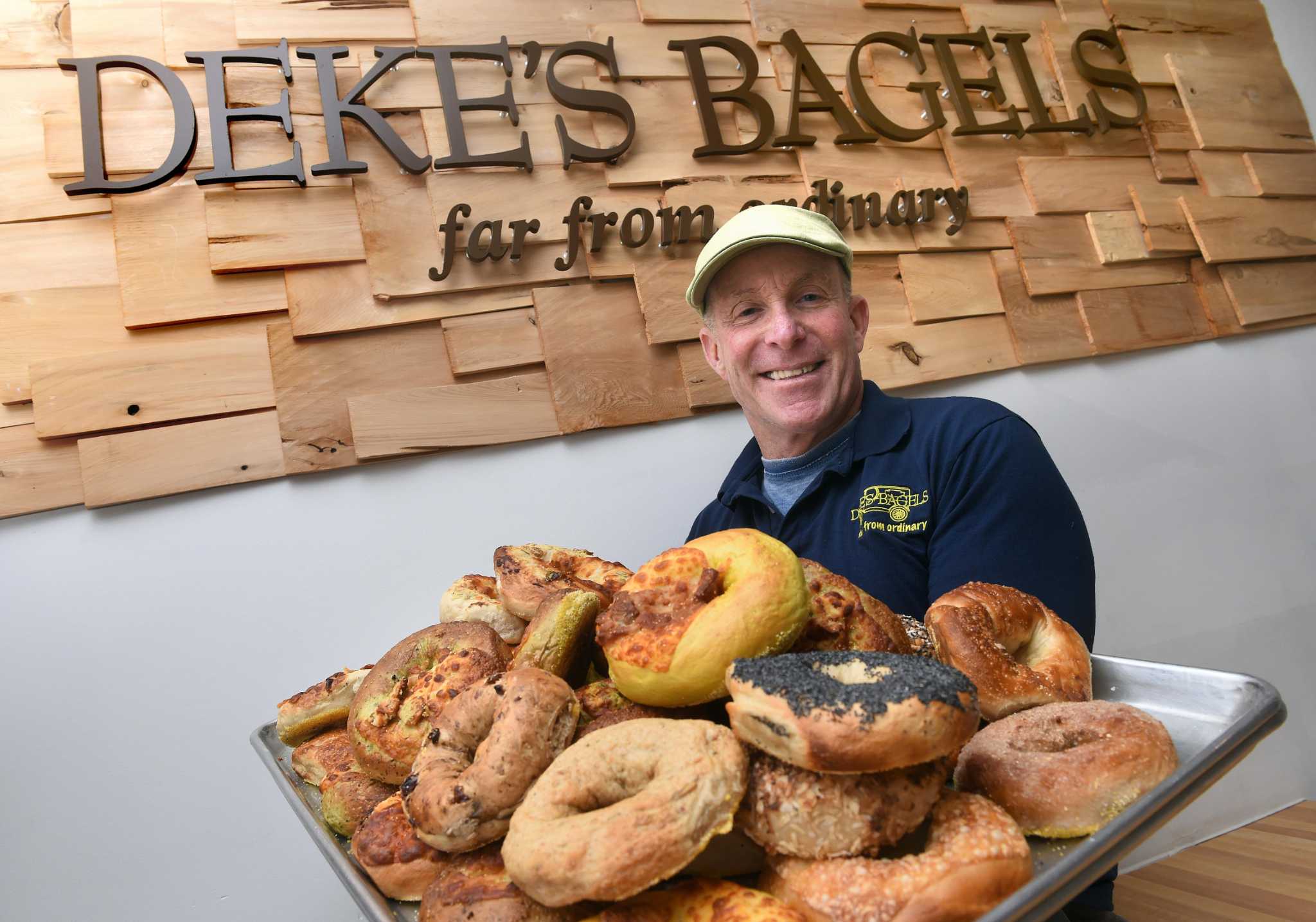 Deke’s Bagels aims to ‘get people up’ with jobs

Deke’s Bagels, which opened last May in Guilford, was born out of the worst business decision of owner Deke Haylon’s life.

“Spectacularly bad, but here we are,” the 55-year-old anime said one recent morning in his cozy shop on the corner of Church Street and Boston Post Road.

The road to the bagel has been a winding one for Haylon. He grew up in West Hartford, summering with his family at Niantic. During a break from college, he got a job as a dishwasher at The Gull in Essex.

“One day, the breakfast cook didn’t show up,” he says. He immediately started throwing hash. His mother reminded him of his early interest in cooking. “She said I would pull a chair over to the kitchen counter to watch and learn,” he said.

He enrolled at the Culinary Institute of America in New York — “the best two years of my life, so far,” he said. ‘I found what I loved to do’ As part of an ‘externship’, he worked with pioneering pastry chef Alice Medrich at Cocolat in Berkeley.

“That’s when I started to see the magic of the combinations,” he said.

After graduating and a stint at the Royalton Hotel in New York, he trained in Los Angeles with Nancy Silverton at the famous Campanile, known for its classic Italian cuisine with a California twist.

“It was a genius of textures and flavors, but never in an artificial way,” he said. “She made it look natural.”

Soon he was back in New York. “I missed the seasons,” Haylon said. “I take inspiration from them.” (Making bagels hasn’t diminished that, it seems. In the fall, he makes a butternut, bacon, and parmesan bagel.)

“I was looking for a job, and a friend was an interior designer and said one of his clients needed a private chef,” he said. “I decided to do it until I got a real job.”

The client turned out to be Blaine and Robert Trump, the former president’s younger brother.

“Every dinner was a massive production,” he said. “Every detail mattered.”

After gigs as private chef with Joan Rivers and Joan Collins, among others, Haylon was back at Niantic to care for his father, who was in failing health. That was in 2014. At that time, he said, “I decided it was time to open my own store at Niantic.”

The plan: a take-out place with all the dishes he prepared in New York.

“It was Tunisian crab cakes with turmeric and pickled ginger, and saffron risotto with parmesan cheese and pancetta, and it was just too fancy,” he said. “It’s kind of a fish market area, and they were saying ‘I don’t eat that’ and I was sinking.”

He also happened to make pastries, English muffins, then, one day, bagels.

“I googled how to make bagels and the recipe was pretty basic, so I played around and incorporated some ideas from Nancy Silverton,” he says.

Occasionally, Janet RisCassi, whom he had known since elementary school, passed by.

“She said ‘these bagels are amazing, I’m going to share them with my friends in Essex,'” he recalled.

The reviews were excellent. Soon, Haylon was receiving calls from cafes in the area.

“One of them asked if she could buy the bagels in bulk,” he recalls. “I told him I didn’t mean it because I was going bankrupt, then jokingly said maybe I should open a bagel shop.”

Maybe you should, she said.

“I hung up the phone, locked the door and papered the windows,” he said. It stayed closed for a month, experimenting with different flavors, malt syrup versus molasses, sourdough starters.

When he opened, word spread. “People were coming from Stonington and Milford and we were selling bagels every day,” he said.

For Liz Manniel, a regular at the Guilford site, the popularity comes as no surprise.

“Deke is very picky about the quality of ingredients in a time when food prices are insane,” she said. “And for a place known for their bagels, some of their other stuff, their almond croissants, their blueberry muffins, are fantastic.”

Wayne Couturas, a Guilford resident, said he was first drawn to Deke’s for their artisan bagels and then for the land bomb, a combination of donuts and muffins that his wife loves.

Then he heard about Haylon’s work with the Opportunities Industrialization Center in New London, which includes a comprehensive post-incarceration rehabilitation program.

“This guy is trying to make a difference in one of the most disadvantaged populations, fresh out of prison, cursed with unemployment or lower-level jobs, with their felony convictions following them,” he said. . “He teaches them a craft that they can take with them for the rest of their lives.”

For Haylon, it’s all part of the vision.

“I’m a recovering drug addict,” he said. “I’ve lost everything to my addiction, and I’ve seen how people get into that cycle and can’t get out of it, and I decided that if I had the chance, if I climbed the rungs, I had to go down and pull people up with me.”

The plan, he said, is “to get a warehouse for the bagel-making operation which is also retail, and open 10 satellite stores, and create jobs to get people out of their cycle”.

“The one thing we hear all the time is that we needed a good bagel shop so badly in this area,” she said.

As for Haylon’s plan to open more stores and employ people trying to turn their lives around, “I can’t wait.”