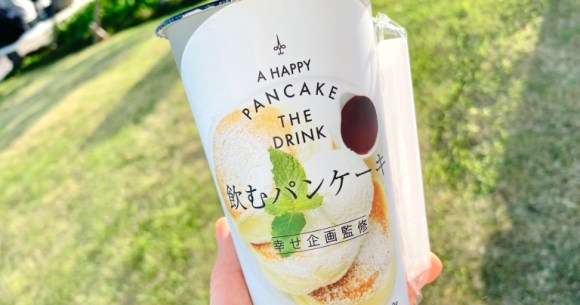 Does Lawson’s new “A Happy Pancake the Drink” live up to our pancake expectations?

We are trying the very latest “drinkable food”.

For some reason, many Japanese beverage companies have made it their mission to turning food into drinks. Not like mixing them until they’re a smooth liquid, thankfully, but formulating drinks that are carefully crafted to taste like a specific food. Whipped cream to drink, curry to drink, rice balls to drink, ice to drink …

It may seem like these companies don’t care about the “why” when making these drinks, but honestly, we’re not mad at it. We’re actually excited, as they’ve just released a drinkable version of one of our favorite breakfast / dessert dishes: Crepes.

It is called “A good pancake for the drink: a pancake to drink”, and it’s sold exclusively through the Lawson convenience store chain. Of course we had to try it, but it was surprisingly hard to find. We had to tour several Lawsons in our area before we found one.

The image on the packaging was that of the a kind of extra thick, extra soft and wobbly pancake resembling a soufflé which Japan became famous for, so we expected more of that kind of flavor than your thinner, firmer traditional breakfast pancake. Honestly, just watching it made us feel pretty happy.

This drink, which is priced at 198 yen (US $ 1.70), has flavor elements of fermented butter and manuka honey, but when we took a peek inside, it looked like a cup of Café au Lait. It was a beautiful, rich shade of light brown. We expected it to be a lighter color, like milk, so that was a bit surprising.

Before tasting it, we sniffed it a bit and smelled a good smell of the sweet and sweet smell of fermented butter. It smelled a bit like pancakes!

Without further ado, we took a sip through the thick straw provided.

Oh! It is really rich and sweet, maybe because of the manuka honey. We love sugary drinks, so we thought it was pretty good! But when we think of pancakes, we think of maple syrup, right? Unfortunately, after a second sip, we realized that although the drink smelled like pancakes, the flavor was more like caramel than maple.

The drink was also really thick and slimy, and he had a few tiny little specks inside, which piqued our curiosity. We looked at the ingredient list to see if we could figure out what it was, and we found “konnyaku treated” Right here!

Konnyaku is made from dried and crushed taro root into a powder, which is usually made into a gelatinous block or chewy noodles. In this case, it looks like it could have been used to add body and texture to this drink. You can see the little grains on the inside of the lid… maybe it’s the konnyaku?

In any case, it was a new mouthfeel that we weren’t expecting, so it was a bit of a shock… but we also liked it quite a bit. It was fun to drink!

It is also recommended that you add fresh coffee to A Happy Pancake The Drink and top with whipped cream for a really tasty coffee dessert drink. It looks pretty amazing and is definitely worth a try for the next one we pick up.

Images © SoraNews24
● Do you want to know the latest articles from SoraNews24 as soon as they are published? Follow us on facebook and Twitter!
[ Read in Japanese ]

There are a million pancake recipes out there, but this light, feathery creation is…