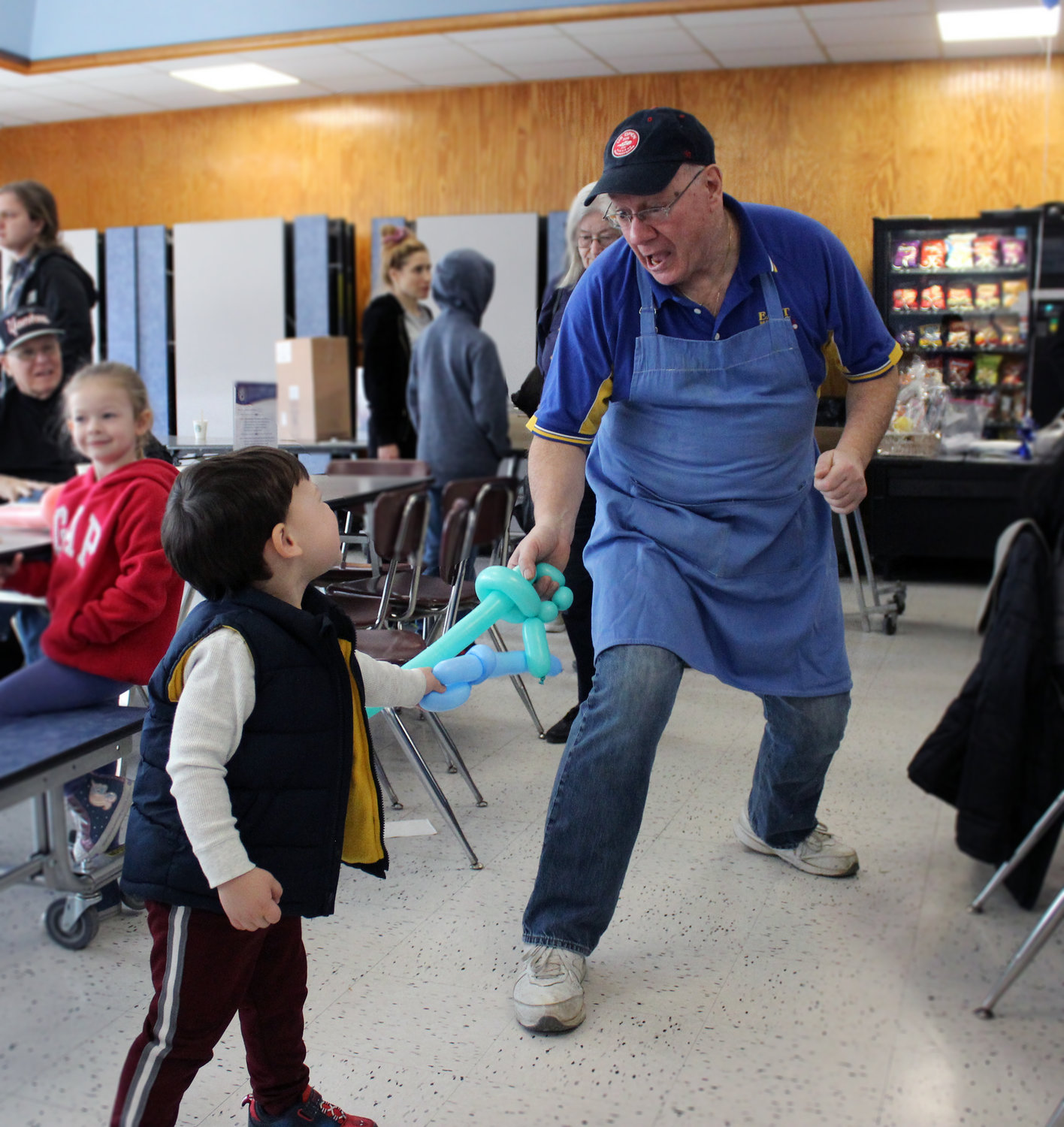 The scent of pancakes and maple syrup wafted through the cafeteria at East Meadow High School on Sunday as hundreds of residents stopped by for a free breakfast provided and served by Club Kiwanis members.

One of the biggest events of the year for the club, breakfast includes not only food, but also a 50/50 raffle, prizes and face painting. Neighbors and friends met while students at the Key Club of East Meadow, the Kiwanis high school section, made balloons for the children.

The breakfast, which has been going on for over 20 years, is the club’s second largest fundraiser, second only to the Steven J. Eisman Memorial Golf Outing. It also served as an introduction to new Kiwanis President Lisa Hallett. Alan Beinhacker was sworn in as president at the club’s installation dinner last October, but he stepped down without explanation last month, so Hallett, who was elected vice-president last fall, took over .

Hallett has attended Kiwanis meetings for seven years, but participated in its fundraisers and events for seven years previously. She got involved when her children joined K-Kids, a Kiwanis club that teaches elementary school students about charity and community service. “When I went to my first meeting I was hooked,” she recalls, “and have been involved ever since.”

Hallett has been a resident of East Meadow for 25 years. She and her husband, Richard, have three daughters: Nicole, an elder at Johnson and Wales University; Julianne, a junior at Hunter College; and Danielle, an elder at WT Clarke High School. Lisa is in charge of record keeping for the Right at Home North Shore LI, based in Hicksville, which provides in-home care and assistance to seniors and adults with disabilities living in communities on the north coast of Long Island.

One of her main goals as president is to fight pediatric Lyme disease by helping the Kiwanis District Pediatric Lyme Disease Foundation of New York. Hallett will promote the cause at the foundation’s 20th anniversary gala on March 22 at the Parc Floral Terrace in the Parc Floral.

One of the guests at the breakfast was John Gridley, of Floral Park, who helped launch the foundation nearly two decades ago, when he was elected governor of New York’s Kiwanis District, a title he he still holds. At the time, Lieutenant Governor Joseph Michael Wuest, of Westchester, NY, became aware of the disease because his granddaughter had been diagnosed with it. Wuest asked Gridley if he would consider fundraising to help kids like her.

â€œAt the time, I didn’t know anything about Lyme disease,â€ Gridley said. But he wanted to help.

When Lyme disease patients are treated with antibiotics within a week of infection, they usually recover within a month or two. Late treatment, however, can lead to chronic Lyme disease, in which the bacteria invade the central nervous system and can cause permanent damage. According to the Infectious Diseases Society of America, insurance companies often deny treatment coverage for the disease because the tests are not entirely reliable. Most doctors rely on symptomatic diagnoses, which can be inaccurate because Lyme disease has a range of symptoms.

Part of the money raised from the pancake breakfast was also donated to the Kiwanis Pediatric Lyme Disease Foundation.