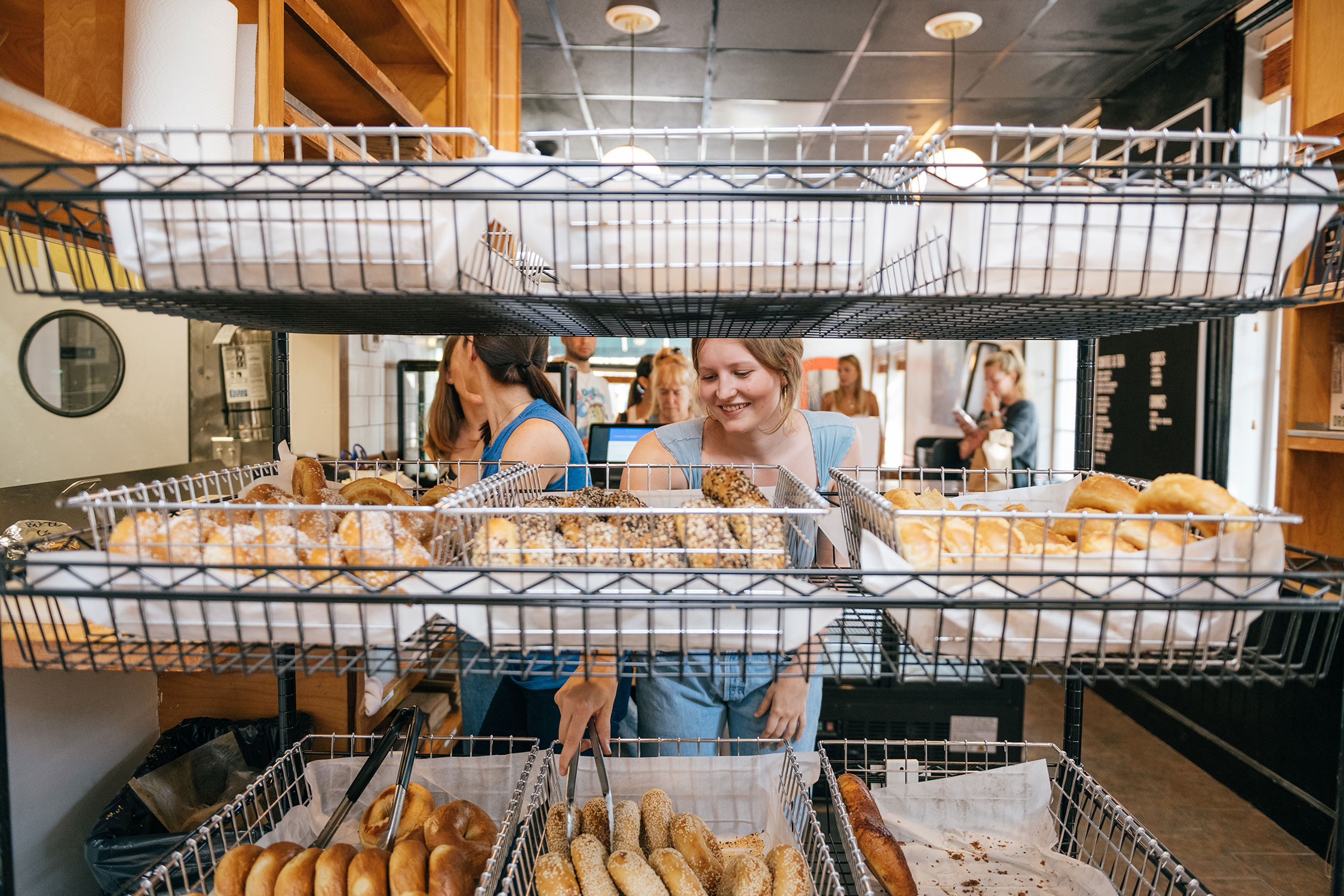 And in the month it opened, it hit some good trouble — selling bagels.

“I’ve been in the back on Google trying to figure out how to make more bagels!” Odachowski said on June 19.

It was around noon that day, and the only bagels left were cinnamon sugar. Twenty minutes later they were gone.

“It’s a really good deal, but I have a background in fine dining, so it’s hard for me to tell everyone we’re complete,” said Bridget Byrne, Odachowski’s fiancée. Byrne is the general manager of Holey City Bagels, with experience running Charleston establishments like Peninsula Grill and Halls Chophouse.

“She is my savior,” Odachowski said. “Because I’m more of an idea type. I love food, but I’m the idea man. She keeps me in check and is very organized.

It’s not just her fiancé who helps out in the business. Odachowski’s father is in the back, rolling bagels with his son.

The bagels offered at Holey City come in a single ($3), half a dozen ($18) or dozen ($36) and come in a variety of flavors, including its most popular ready-made bagel. . Other options include cinnamon sugar and sesame. Vegan cream cheese and butter are available upon request.

And what’s a bagel shop without a good bagel sandwich? Odachowski offers a plethora of different-style sandwiches for breakfast and brunch, including a classic egg and cheese, a vegetarian delight, the Reuben pastrami or a New England favorite Taylor ham, egg and cheese. All sandwiches are available on any bagel (subject to availability).

All sandwiches and bagels can be paired with beers made for breakfast and a coffee bar just down the hall.

“I kind of want to have the whole bottom of our cooler in the dining room with just local beers for breakfast, which isn’t really a thing,” Odachowski said. But he will make one. The breakfast beer options he would like to include are Honey Toasted Oats or Cereal Dinner from Edmund Oast’s Brewing Co. He’s still building that collection, so check back for new beers to pair with your breakfast sandwiches. -lunch. But if you’re looking for a more traditional breakfast drink, Holey City has PBR Hard Coffee, which Odachowski says “isn’t too bad.”

After signing the lease, Odachowski learned that the space also included free parking across the street and a coffee bar.

“When I first called the number on the sign that was outside the space, I didn’t even know it was part of it,” he said. “Five Loaves apparently made it into a juice bar and I had no idea it was there. It was like an added bonus.

The coffee bar is stocked with King Bean coffee. “Their cold brew is amazing,” Odachowski said. “We spoke to a number of different coffee companies and I’m a cold brew guy so that made me go with them.”

In addition to cold brew, the Holey City Coffee Bar also serves drip coffee, traditional espresso, and espresso-based drinks like Americanos or lattes. Drinks can be ordered at the main counter and coffee bar, but all food orders are made at the main counter.

“We tried to figure out how to incorporate having two entrances,” he added.

Odachowski has been rolling bagels (and selling) for the Lowcountry at the Charleston Farmers Market in Marion Square since 2017 because it was always something he wanted for the city.

“I’ve been here a long time,” he said. “But I always felt there was a need for more traditional bagels. I wanted to do the hand roll well before baking them like they do in New York or New Jersey.

Odachowski grew up in New Jersey, 20 miles from New York, where the bagel scene flourished. The 39-year-old moved to Charleston when he was 15 and has been here ever since.

He bought a food truck in late 2020. And for the past year and a half, Odachowski has been running Holey City as his full-time gig since quitting his old job as a teacher.

“It was really successful,” he said. “I’ve always wanted to open a bagel shop. This has always been one of my goals. I also like to teach… So this [was] hard to leave, but it was a bit of the madness of the pandemic.

Once Odachowski decided to quit teaching, he continued to drive the food truck around town and partake in local markets and pop-ups.

Before his brick and mortar, Odachowski spent his mornings selling bagels at KTCHeN in North Charleston. His days started around 2:30 a.m. to 3 a.m., he said, to account for cooking preparation, cleaning the kitchen for the next person and transportation time.

“After doing this for six months, I was like, ‘I need a brick and mortar right away,'” he added. “I can’t imagine how great it would be to take your bagels out of the oven and put them on the rack and you’re good to go. The food truck life was a chore.

Now, with his own brick and mortar, Odachowski’s day doesn’t start until 4 a.m.

And they always sell out.

city ​​paper has been bringing the best news, food, arts, music and event coverage to the Holy City since 1997. Support our ongoing efforts to showcase the best of Charleston with a one-time donation or become a City Paper member Club.

Debt Consolidation and Your Credit Score: How It Hurts and How It Helps