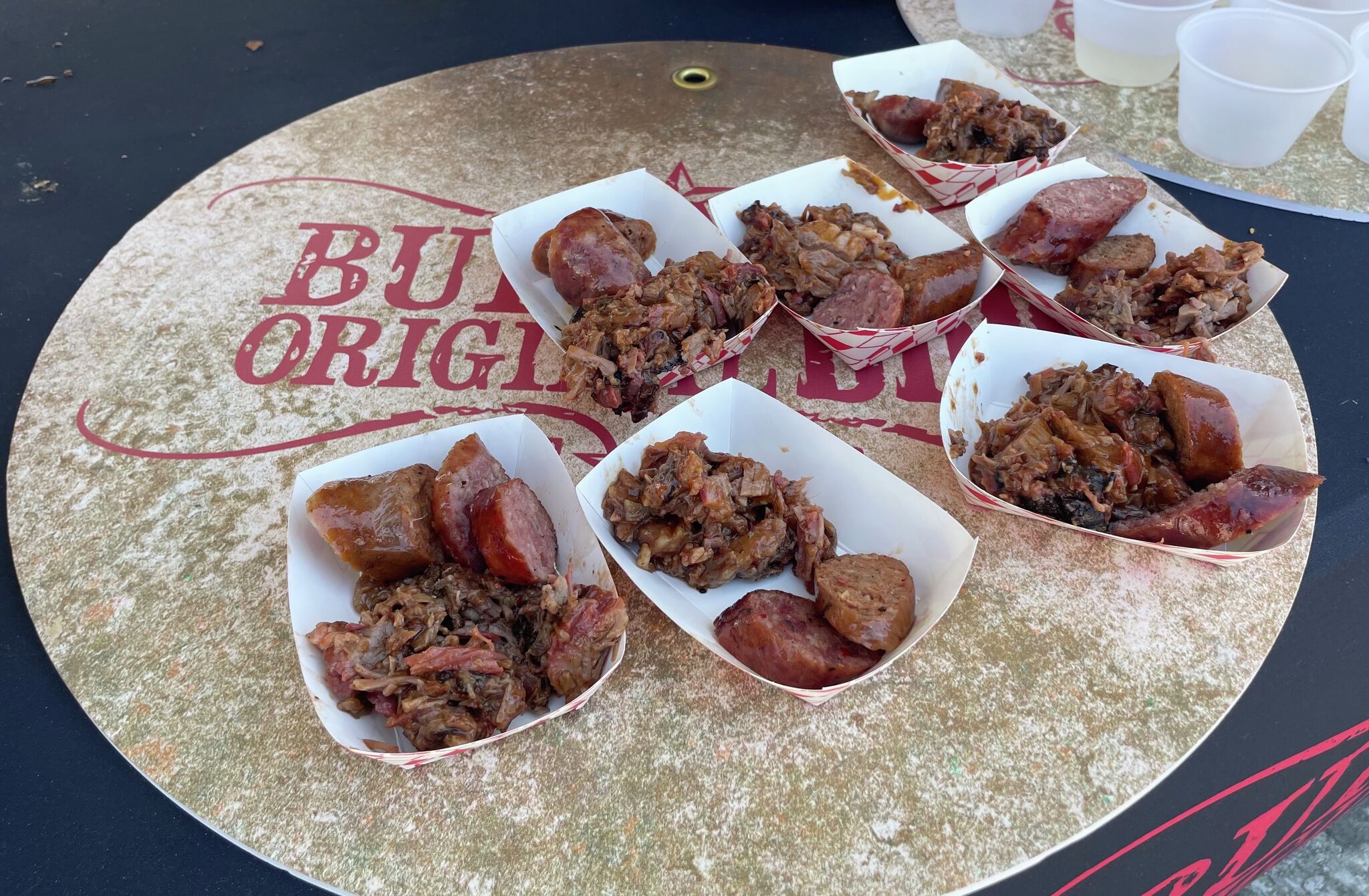 How to Get the Best Houston Barbecue Festival Bites

The Houston Barbecue Festival was the latest event to delight hungry Houstonians with its return after a two-year pandemic hiatus.

On Sunday, about 2,000 barbecue fans gathered at the Humble Civic Center to enjoy small bites from the city’s top pitmasters, along with a handful of others who traveled from southeast Texas.

Many barbecue restaurants opted to present their classics with tiny sausage links, chunks of ribs or brisket slices, while others were more creative with their fare, offering eaters tacos, nachos, chimichangas and more.

Here are some of the best Houston Barbecue Festival bites and where to get them now that the event is over. Many can be found in restaurants, but for all the festival exclusives listed here, we’ll give you the next best thing on the menu.

How to get it: Blood Bros. BBQ featured a variation of chimichanga, a “Chino-changa” with brisket bulgogi and kimchi aioli. It was a festival exclusive, but you can get the Asian-influenced push-the-wrap barbecue from the three chefs at their boutique in Bellaire. The menu changes often, but the brisket fried rice is a must.

The bites: Ground beef and sausage

How to get it: Burns Original has been an Acres Home institution since 1973. The classic, sweet ground beef and East Texas-style sausages the team served at the festival are available on the restaurant’s regular menu, and if you’re craving gravy Burns barbecue, you can find bottles of it at any local Kroger.

The bites: Salad with stuffed potatoes and coleslaw

How to get it: Both of these items were way more decadent than they look, as both were topped with minced brisket and cheese sauce. Head to Corkscrew BBQ in the spring for the Stuffed Potato Salad, which comes with the meat of your choice, a homemade cheese sauce between the potato and the meat, and is topped with green chile ranch and dill. ‘Green onions. The restaurant serves the coleslaw on its own as a side dish, always accentuated by the brightness and crunch of the leafy greens in the coleslaw mixture. And of course the beef brisket – just be sure to show up at opening time at 11am

The bite: Breast, pimento cheese and marinated jalapeño on a firecracker

How to get it: The mix of flavors and textures in this little bite was a hit. Pitmaster Willow Villareal and Chef Jasmine Barela opened their chic new East Downtown restaurant, J-Bar-M Barbecue, in November 2021. That exact bite isn’t on the menu at J-Bar-M, but there’s always food. brisket at the restaurant, and—pro tip—pimento cheese and firecrackers are on the bar’s bite-sized menu, which appears Fridays and Saturdays only from 4 p.m. to 10 p.m.

How to get it: The diversity of the barbecue scene in Houston is unparalleled. Case in point: JQ’s Tex Mex, which calls its cuisine “Chicano-style Texas barbecue,” serving its smoked meats on tacos, tamales and more. Unfortunately for Houstonians, JQ’s is a pop-up with no regular time or location, but it’s worth watching their Instagram and Facebook pages like a hawk to see where they’ll be next.

How to get it: The Heights joint brought a little taste of Tennessee to Texas on Sunday, and we weren’t mad about it, especially since the Memphis-style pork was cut into nachos with melted and shredded cheese, green peppers, tomatoes and Pinkerton’s signature barbecue. sauce. We’re sorry to tell you: it was another festival exclusive. A trip to Pinkerton’s never disappoints, however, where you can stock up on pulled pork or pork ribs, available glazed or dry-rubbed. And the South Texas beans are sure to scratch the itch left by those nachos.

How to get it: This Montrose mainstay’s breakfast tacos are available seven days a week from 7 a.m. to 10:30 a.m., including brisket and egg tacos and pulled pork hash and egg tacos. For even more of a Tex Mex fix, head to Candente next door, which is also owned by pitmaster Michael Sambrooks.

How to get it: This Tomball hotspot is just as proud of its handcrafted chocolates as it is of its perfectly smoked tail. The chocolate panna cotta with pecan-praline whipped cream and candied pecans is available on the regular menu, as is the legendary soft and spongy carrot soufflé. The equally must-try chili relleno sausage is a tie stuffed with chili and tons of cheese.