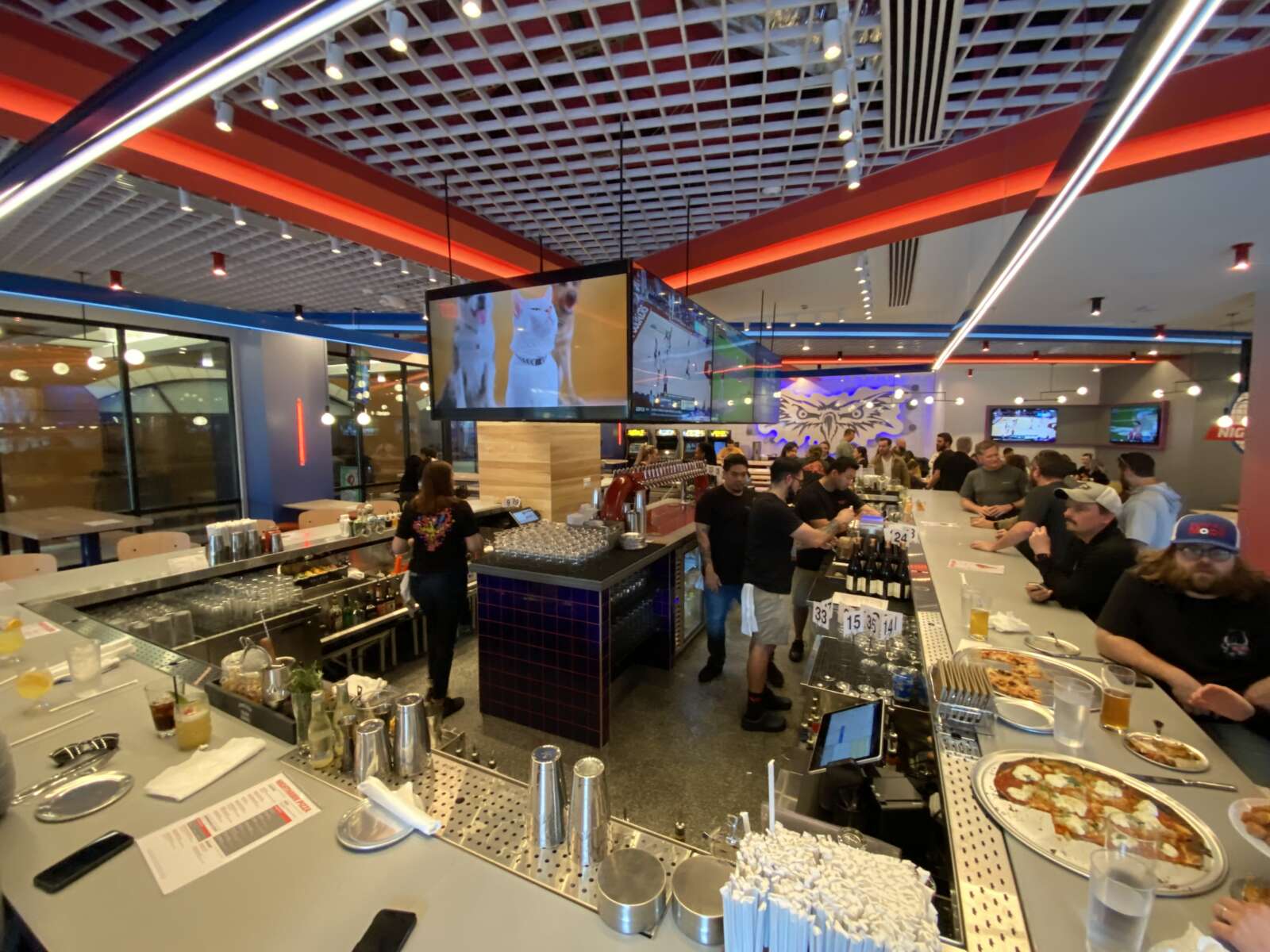 (Updated at 12:20 p.m.) The former Champps space at Pentagon Row is back in business as a beer and pizza place.

Nighthawk Pizza will open to the public Thursday, March 24 at 3 p.m. in the large space at 1201 S. Joyce Street, following a series of private “friends and family” parties this week.

The concept marries a 90s vibe with a pizza-centric menu and an on-site brewery operated by Aslin Beer Company. It is led by chef Johnny Spero, from Netflix Final table fame and other culinary credentials, and backed by a group that includes local serial entrepreneur Scott Parker. (The group also recently opened Poppyseed Rye in Ballston.)

As well as thin-crust pizzas and beer, the menu includes a range of starters, salads, sandwiches, burgers and cocktails – both handmade and on tap. Red and blue neon lights, banquettes, and retro arcade games help give the restaurant its ’90s feel, partially offset by the many flat-screen TVs that surround the large bar and cavernous dining room.

“The design inspiration for the space was The Max from ‘Saved By The Bell’,” Parker noted.

In all, the brewery has 10,000 square feet of space, plenty for the crowds Parker and his company hope to draw from the growing neighborhood, which includes Amazon’s HQ2, slated to open in 2023 a few blocks away. .

Parker said his group of partners are “already researching our next locations for Nighthawk, as well as developing other projects.” Additional locations in the DC area and other cities are expected to be announced “in the coming months,” he said.

Meanwhile, Nighthawk isn’t the only spring opening at Pentagon Row, which was rebranded as “Westpost” in 2020.

The “taco temple” Banditos Bar & Kitchen is set to open in April, a restaurant above and also overlooking Westpost’s central square and the ice rink which will soon be dismantled for the season. A new 34,000 square foot Target store is also set to open next month on April 3, along with sushi restaurant Kusshi.

Financial phrases which leave Brits feeling most confused are ‘personal loan rate’, ‘offshoring’ and ‘equities’, a study has found