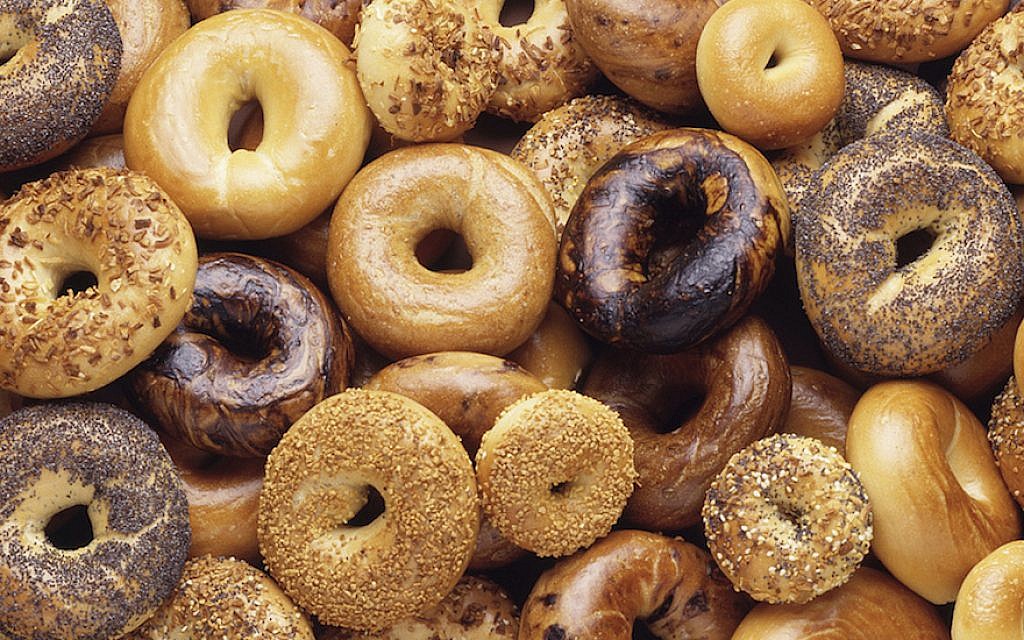 New York’s Most Popular Bagels, According to GrubHub

New York Jewish Week via JTA – In honor of National Bagel Day this Saturday, GrubHub has released data on the most popular bagels in New York – and the results may surprise you.

The online delivery platform took a look at what New Yorkers ordered through its service in 2021. Let’s start with the most popular variety of bagels across the five boroughs: The winner is — drum roll — everything.

It’s a relief — everything is everything! But from there, things get a little suspect: cinnamon, onion, blueberry, and jalapeño take places two through five on the list of most popular flavors. Seriously, what self-respecting New Yorker orders a cinnamon or jalapeño bagel? Reveal yourself! What happened to the simple sesame? The classic poppy seed?

Of course, these stats come from GrubHub orders only — they don’t account for other delivery services like Seamless or UberEats, as well as phone orders and the old-school method of showing up somewhere in person.

Still, the GrubHub data offers some interesting insight into neighbors’ bagel habits. The city’s most popular bagel shops, for example, are almost evenly split between Queens, Manhattan, and Brooklyn.

Utopia Bagels in Whitestone, Queens wins the award for most popular bagel store in town, followed by Tal Bagels on the Upper East Side, Brooklyn Bagel & Coffee Company in Astoria, and Forest Hills Bagels in Queens .

To complete the list: Ess-a-Bagel in Midtown East, Bagel Point in Greenpoint, David’s Bagels in Gramercy, Tompkins Square Bagels in East Village, Bagel Pub in Crown Heights and, last but not least, Bagelsmith in Williamsburg.

The crowd at the 2nd Avenue location of Tompkin’s Square Bagels was steady and reasonably quiet Monday morning despite reports of a cream cheese shortage. (Julia Gergely via JTA)

GrubHub also tracked the most popular bagel sandwiches. The classic (if not kosher) bagel sandwich with bacon, eggs and cheese comes out on top. It’s its bacon-less counterpart that takes third place, with a smoked salmon combo with green onion spread sandwiched in between (well, I feel seen!). Fourth on the list is a BLT bagel sandwich, followed by ham and egg, which, isn’t that a New Jersey thing?

Interestingly, GrubHub doesn’t seem to have posted information on the most popular cream cheese orders (it’s unclear if the cream cheese shortage has anything to do with it). Considering the variety of really wacky flavors offered at many local bagel shops – Oreo, birthday cake…bacon cream cheese, anyone? “I think it’s probably a good thing they kept it to themselves.

If so, we have a request.

Every day, our journalists aim to keep you up to date with the most important developments that deserve your attention. Millions of people rely on ToI for fast, fair and free coverage of Israel and the Jewish world.

We care about Israel – and we know you do too. So today we have a question: show your appreciation for our work by join the Times of Israel communityan exclusive group for readers like you who appreciate and financially support our work.

yes i will give

yes i will give

Already a member? Log in to stop seeing this

You are a dedicated reader

We’re really glad you read X Articles from The Times of Israel over the past month.

That’s why we started The Times of Israel ten years ago – to provide discerning readers like you with must-read coverage of Israel and the Jewish world.

So now we have a request. Unlike other media, we don’t have a paywall in place. But since the journalism we do is expensive, we invite readers to whom The Times of Israel has become important to support our work by joining The Times of Israel community.

For just $6 a month, you can help support our quality journalism while benefiting from The Times of Israel WITHOUT ADVERTISINGas well as access Exclusive content only available to members of the Times of Israel community.

Thank you,
David Horovitz, founding editor of The Times of Israel

Already a member? Log in to stop seeing this