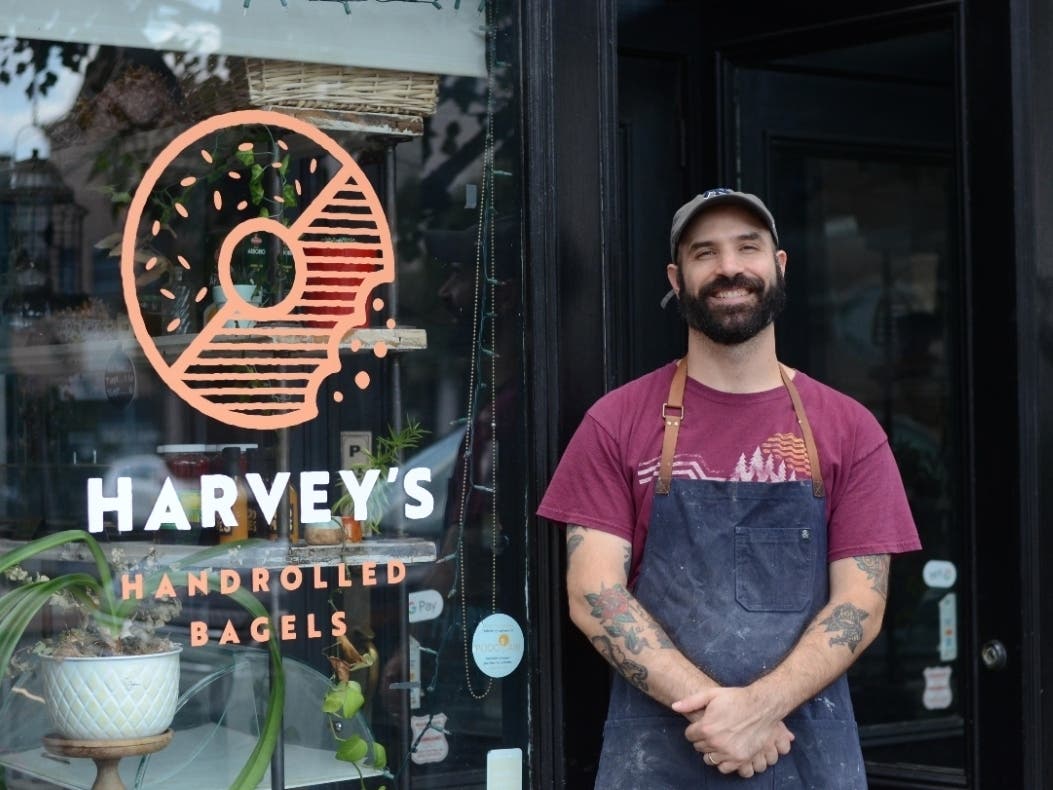 MONTCLAIR, NJ — Matt Harvey rolled the dice and went with his instincts, giving up a cozy job in medical sales to pursue his passion project: making bagels. And now a survivor of the so-called ‘Great Resignation’ is celebrating one of his life’s proudest accomplishments with the opening of his own storefront in Montclair.

Harvey’s hand-rolled bagels celebrated their grand opening at 98 Walnut Street earlier this month, generating a buzz among neighborhood foodies from the get-go. The restaurant is open from Tuesday to Sunday. Learn more about this local business here.

It was a moment that took years to prepare for Harvey, who began his passion project as a weekend pop-up in the bakery section of the local restaurant, Walnut Street Kitchen. The restaurant’s owner and chef, Beverly Lacsina, is now a business partner in Harvey’s new venture — as well as a friend.

Here’s the origin story of Harvey’s Handrolled Bagels, according to its owner:

“In 2020, during the pandemic, Matt Harvey started working from home in his corporate job in medical sales, which he had been doing for almost a decade, and began to get a passion for making bagels hand rolled. He took his basic training in biology and chemistry, which he studied at Rutgers University, and applied it to the science of bread to create the perfect hand-rolled bagel. A cross between New Jersey’s chewy dough and New York’s crunchy bagels results in something incredibly light and decadent. What started as a side project during the lockdown, with the first bagels sold to friends and family and proceeds donated to the Community Food Bank of New Jersey and other organizations to give back to restaurant workers and to medical staff who were overworked and underpaid due to the pandemic, proved to be his true passion, which he celebrates today with the opening of the first store.

“I can now see myself as part of the Great Resignation, a cultural movement that has become a choice for more and more people across the country,” Harvey said, adding that his new job has allowed him to “say goodbye to the corporate 9 to 5 grind.

And now her new career involves work that often mixes with pleasure.

“With my years in sales, I’ve traveled a lot and tried bagels all over New York and New Jersey, and it’s been such a fun quest to find the best ones and figure out what makes a bagel awesome,” Harvey said.

In what is becoming something of a “food friendship incubator”, many of the shop’s products come from a network of young, passionate Jersey friends who share a love of food, Harvey pointed out. This includes Cozz Coffee, another North Jersey passion project that garnered a cult following, and Good Times Hot Sauce, a non-profit startup organized by one of Harvey and Lacsina’s longtime friends Brian Goglia. which provides resources for young skaters around the world. world.

In the meantime, here’s a taste of what to expect at his new restaurant, Harvey said:

And that’s not even touching the bagels, which are “crispy and chewy on the outside, but soft and chewy on the inside.” But don’t take Harvey’s word for it — do the “Knock Test” for yourself, as seen in the video below.