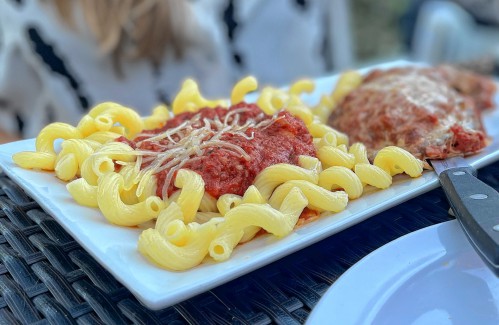 Old School Italian American Near You

Everyone who writes about food has their own biases. You cannot avoid them. The best you can do is recognize them.

I will quote three of mine. First, I’m a sucker for nostalgia. I like places that have been around for a while, that I’ve been going to with my family since I was a kid. It’s really hard to run a successful restaurant business for one year, but it’s next to impossible to survive for four decades. I am in awe of the few places that have managed to pull this off.

Second, I think most writing about cooking in the last days focuses too much on avant-garde restaurants whose chefs are inventing new recipes every week. I respect culinary creativity, but too often overlooked are the chefs who simply make the most delicious versions possible of traditional local recipes we already know and love.

My third bias is towards affordable restaurants. It’s good to use only the most local, sustainable and farm-to-table ingredients. But the high costs of these ingredients are passed on to customers in the form of $30 entrees. Restaurants that instead choose to be more economical and accessible to more of the local community deserve equal respect.

Italian cuisine is a complicated thing to approach. I lived in Italy and the food has almost nothing to do with the Italian cuisine I grew up with. My grandparents, Nonnie and Grandfather. Most Italians would scoff at lasagna without ground meat, but Nonnie was raised by her mother (whom I called “Ma”) as a vegetarian, so her two biggest specialties as a cook – eggplant parmigiana and the cheese lasagna – were vegetarian options. Nonnie’s cooking was 200% good because it was 100% Italian and 100% American.

The Italian red sauce culture and flavor palate first emerged in the 1930s in the New Haven area. We’re close enough to the birthplace of Italian Americans to have plenty of OG spots. In a later column, I’ll cover upscale Italian restaurants, or what I call “Italian American 2.0” cuisine. It would not be fair to combine these two categories in a single column.

So it’s Italian-American 1.0: the spaghetti with red sauce, meatballs and melted cheese that you, like everyone else in America, have obsessed you with since your earliest childhood.

In a field rich with competitors, the conversation must first start with Joe’s, my favorite restaurant in Northampton and perhaps the world.

Enter Joe’s and you travel back in time. The place opened in 1938 – can you imagine Northampton in 1938? — and it looks like not much has changed since then, starting with the gorgeous sombrero panel on the outside. The walls are lined with retro Tex-Mex murals and a multi-piece collage of local sports memorabilia. The flamboyant red and white tablecloths evoke Sinatra. Everything is delicately lit by just the right amount of lighting.

But what takes Joe’s to the next level is the quality of the staff and the crowd of regulars, some of whom have probably been hanging out here for 50 years. Even on the quietest night, Joe’s is ignited by the human spirit. The bar side of the restaurant is the best place in town to get together with strangers for an all-night devilish analysis of the Red Sox pitching staff.

Even amid all the excitement, you’ll be distracted by the gigantic meatballs. The meal-sized meatball casserole appetizer, a steal at $8.99, puts two of those wonderful plump spheres of flavorful satisfaction in a baking dish, smothered with a deep red sauce and well seasoned and a generous cast of mozzarella. The sausage casserole, which replaces the meatballs with juicy Italian sausages, is equally delicious and plentiful.

Joe’s menu is relentlessly traditional. Pan-fried mushroom salad may be the only gift you are in the 21st century. Generously cheesy sausage pizza and even cheesier garlic bread are two of the purest and most indulgent comfort foods. Eggplant parmesan is made into a thick batter and fried to an ideal crisp. On the lighter side, a meal-sized Italian salad bowl hits the mark; the lemon chicken in a white wine sauce is tender and addictive; and the Spanish clams in an eminently soppable broth are a dark horse winner. The entry-level Chianti is one of the best bottles of wine in town. I could go on, but I’m going to run out of space. Just go to Joe’s on Market Street and see for yourself.

The saddest thing to happen to the Northampton restaurant scene since I started writing for the Gazette in April was the May closure of Sylvester’s, which I recommended in my very first column. The good news, however, is that the owners of Sylvester also run Roberto’s, just a little further up King Street in Northampton, so all the grandeur isn’t lost. It’s just refocused. If you were Sylvester’s lover, like me, you can still support the family.

Roberto’s is a baby by Joe’s standards, but a local mainstay by everyone else, founded in the 1960s. The place is simple and folksy inside, with balanced activity that gets you in the mood. They are good for accommodating large groups. Roberto’s is also a sleeper hit for alfresco dining: you can sit on a gracious patio next to the grand old house and watch hipsters across the street selling outrageous vintage clothing. They might even sing or rap.

Thin crust pizza and cheesy garlic bread are two other perennial favorites here. They’re both in the greasy, stacked culinary arts school of American pizza and garlic bread, an art that began to flourish in the Northeastern United States around the time of the birth of Roberto in the 1960s.

But the best thing on the menu is what Nonnie would order every time: eggplant parmigiana, crispy on the outside and melty on the inside and absolutely addictive. Most main courses are accompanied by a choice of pasta. The cavatappi (wavy noodles resembling macaroni and cheese) are by far the best.

Ravioli is another strength in the kitchen: Butternut Squash Ravioli is deliciously saucy and generously topped with shredded cheese, while Buffalo Chicken Ravioli is stuffed with ground chicken and served with blue cheese. These are not dishes from the 1960s, but they too can live for a long time.

Nini’s in downtown Easthampton was born in 1977, a year after me, and like me, it’s quite a far cry from the American side of Italian-American. There’s ribbed salad, crispy fried mozzarella cut into beautiful wedge shapes, and a rich gorgonzola fondue; veal cutlets delicately breaded in egg like picatta, or in breadcrumbs like crispy parmigiana; and ricotta stuffed shells baked with red sauce, my all time favorite. Eggplant parmigiana, my main obsession in this article, is also what it should be.

The interior is dark and welcoming, with fun and colorful murals, warm lighting and comfortable cabins. Even the main entrance is charmingly old-fashioned. It’s the ultimate crowd pleaser for old and young, and even impossible-to-please teenagers. This is where I went to my high school prom dinner.

Actually, to be more precise, it was an anti-prom dinner, organized by the kids who were too cool for school and didn’t want to go to the real prom with the little boppers. It was a big relief for me, because I didn’t have a prom date anyway, and at anti-prom it was okay to go in a group.

It was my first time wearing a sports jacket without my family in the room, and I was lucky enough to have a whole group of friends ready to help me wipe Nini’s red sauce on various parts of my crisp white Bradlee dress. shirt.

An unscientific study of food social media reveals that what people rave about most at Nini are the desserts. Reviewing desserts is my biggest weakness as a food writer, because I’ve already eaten too much of everything at this point. But I still remember the cake at Nini’s after the ball.

Cicero, in 45 BCE, was the first to utter the great proverb – later adopted by Miguel de Cervantes – that hunger is the best sauce. When people rave about what they’re eating when they’re already stuffed, that really means something.

The short list in this column was long. There are probably 10 other places in the area I would confidently send someone to for an old school Italian American. Three of them are particularly notable for their gargantuan portion/reasonable price ratios, and I want to leave you their names as well:

Florence Pizza, Florence. An oldie with a soft glass atrium that screams 1980s. The cheese-heavy pizza is greasy in Roberto’s pan but with a thicker crust. The apps are good and the beer is cold.

Pizza Amore, Northampton. It’s only a student counter inside, but Pizza Amore is great for takeout, with great value eggplant grinders and a huge plate of spaghetti or ziti with sausage that could feed at least three normal-sized people. appetites.

Pasta and Basta, Amherst. When my grandparents went out to eat alone, this was the place, every time for at least a decade. They enjoyed good Italian food, sure, but they loved it everywhere. They weren’t that picky.

Nonnie and Grandpa had been through the Depression, so they were all about saving money and really cared about not wasting food.

At Pasta e Basta they would split a single order of reasonably priced eggplant and add the optional bowl of pasta for a few dollars more. They would always leave with plenty of leftovers, including all the uneaten buns Nonnie had stuffed into her purse, which instead of being wasted, would be treated with all the respect our daily bread deserves.

Robin Goldstein is the author of “The Menu: A Restaurant Guide to Northampton, Amherst and the Five Colleges Area”. He sits remotely on the faculty of agricultural economics at the University of California, Davis. He can be contacted at [email protected]