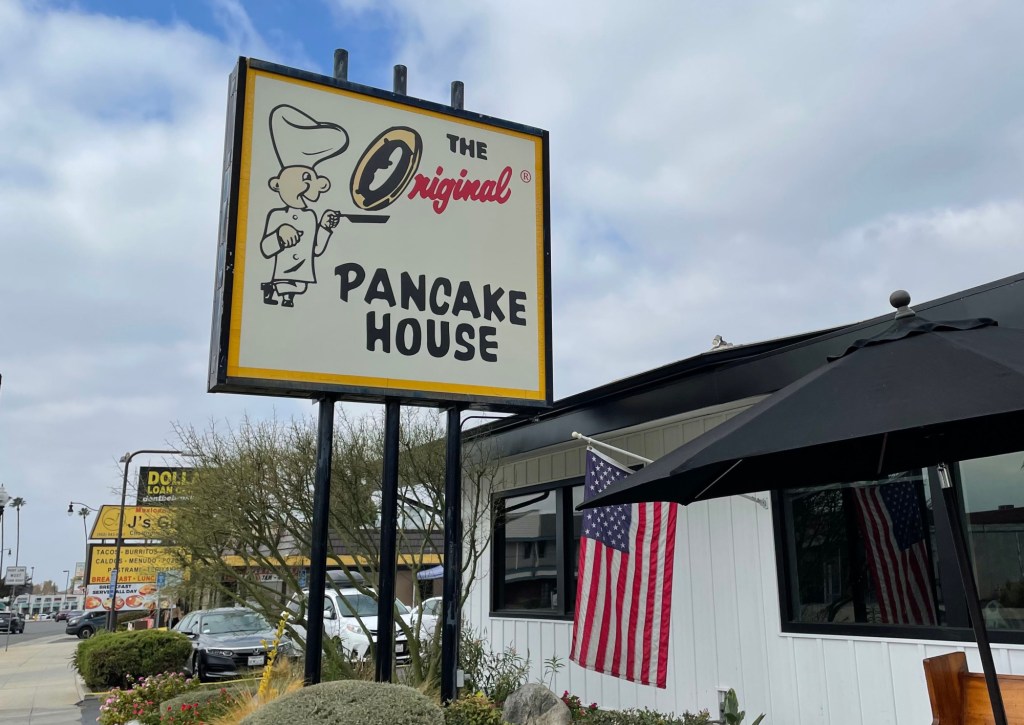 It also raises the more fundamental question of why we eat pancakes for breakfast and, for the most part, not for lunch, and most certainly not for dinner. I mean, we eat bread all day, why not pancakes?

It gets even weirder when you consider that in the 1700s pancakes were regularly eaten as part of dinner. But apparently back then crepes were thinner, like French crepes or Swedish pannkakor. By the 1800s, pancake technology had devised ways to make the creatures rise into thicker creations – so thick they would have overwhelmed the rest of the dinner meal.

They had turned into pancakes. They could be cooked fast enough to be eaten fresh off the grill for breakfast. But dinner didn’t require such speed because stews and roasts took all day to cook. Breads too. During the Civil War, pancakes for dinner were considered a sad sign of culinary desperation. The dish had its place, which always seemed a bit odd to me, since a breakfast of very beefy pancakes is loaded enough in carbs to send me back to bed. Proteins, they are not.

This also explains why The Original Pancake House is open for breakfast and lunch, but definitely not for dinner. There’s nothing on the menu here but traditional breakfast dishes; there are no grilled cheese sandwiches hidden in a side section, no soups, no salads. Other than spinach, peppers, and broccoli, there’s nothing green served here. The Original Pancake House’s mission is to serve morning meals. And too bad if he doesn’t stick to his morning gospel: “Our pancakes (and waffles, pancakes and eggs) that are in heaven…”

The very first item on the menu, under the heading “House Specials,” is the 49er Flapjacks. For most of us, “flapjack” is just a throwback name for a pancake. In England pancakes and pancakes are kissing cousins, but they are not the same thing. There, a flapjack is made from a tray-cooked mixture of rolled oats, sugar, butter, and syrup. Pancakes are thinner and made with milk, butter, flour and eggs. At The Original, flapjacks are described as “soft and tender.” They are definitely not as thin as pancakes. But they are not thick enough to bring them closer to a cake. They are served with the necessary sides of butter and syrup. But then, that’s about it.

House Specials are truly special, but so is everything. They run for baked apple pancakes, which take “up to 30 minutes to make.” “Ultra-thin and lacy” Swedish pancakes with “imported” cranberry sauce. Baked German pancakes. And ever so cute tiny Dutch Baby pancakes with lemon wedges. Once you get past the “house specials,” there are 16 pancakes — not all of which are made from the same batter.

Corncakes, made with whole corn kernels, are tossed in with the pancakes – a very tasty touch, adding texture and chewy flavor to the cakes. And potato pancakes with applesauce or sour cream. I’ve known them for so long that latkes, calling them pancakes seems wrong. Pancakes are pancakes and latkes are latkes. Maintaining this notion maintains balance in the universe.

The menu continues with omelettes, pancakes and egg dishes, the most important of which is a farmhouse egg steak. The menu tells us it’s a “breaded beef fritter topped with a peasant sauce made with bacon and chunks of sausage.”

Eggs Benedict are probably the fanciest dish on the menu. They come with a side of buttermilk or potato pancakes. There are also pigs in a blanket. And French toast.

All this is accompanied by a parenthesis detailing the calorie count, which begs this question: who is really paying attention to these counts? It’s a good idea that the menu tells us that “2,000 calories a day” is what most of us need. But I don’t go to The Original Pancake House to count my calories. I will enjoy. To please yourself. To eat my fill. For breakfast and maybe lunch. Keeping it simple is what The Original is all about.

Totally Worth It, Week 5: Paying off debt

Where to find the best pizza in Hong Kong