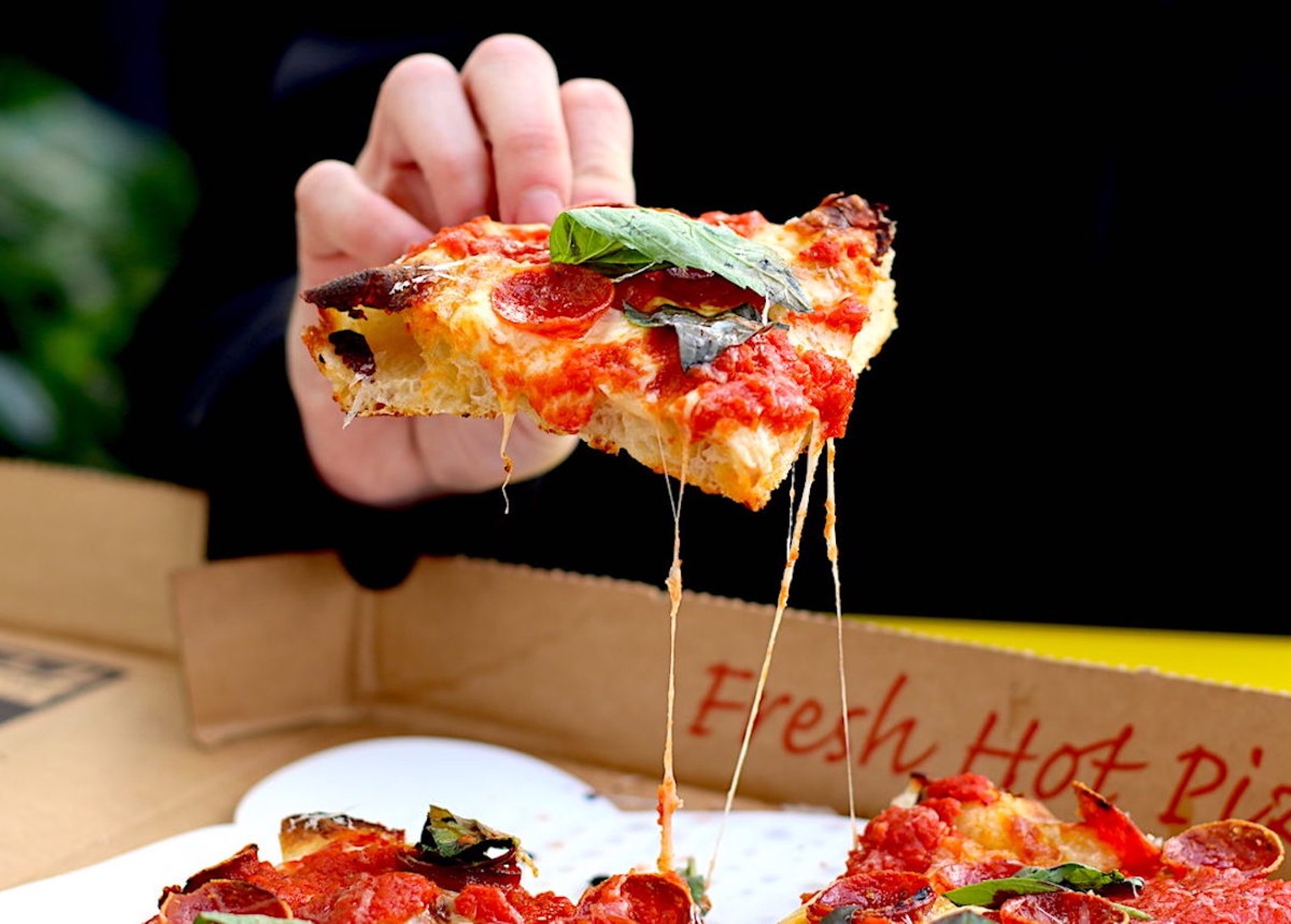 It’s 2:57 p.m. on a cold Saturday afternoon in Miami, and there are already ten people lining up outside Old Greg’s Pizza, which is scheduled to open at 3 p.m.

By 3:15 a.m., the number had risen to just over 20, with a line stretching north along NE Second Avenue. Pedestrians walk past, pausing to cast a puzzled glance at the string of people congregating along the sidewalk at the far end of Miami’s Design District.

At 3:20, someone from the back of the line approaches the entrance to Old Greg. The energetic sounds of the 90s R&B croon emanating from the speakers outside the restaurant as she asks the question that must be on everyone’s mind:

“Have they opened yet?” she asks.

“They said it would take a few more minutes today,” a front-liner replies.

A little before 3:30 am, hope arrives in the form of paper menus. They are taped outside the entrance and along the wall where eager customers wait. It lists the day’s offerings: a special porchetta and polenta, chicken wings, salad, breadsticks, meatballs, dessert and, most important of all, pizza.

With places like Ghee Indian Kitchen, Michael’s Genuine and El Bagel on his resume, Tetzner shared that he originally aimed to start selling pizza in March 2020, but the closures derailed those plans. To bide time, he and Richie took to Instagram — posting photos of pies being gifted to friends, family, foodie influencers and people in the restaurant industry — in hopes of creating a dynamic.

In July 2020, the duo connected with Miami chef Brad Kilgore, who found Old Greg’s via Twitter. A notorious pizza lover, Kilgore lent the couple kitchen space in his Japanese speakeasy, Kaido, allowing them to share their pies with an increasingly voracious audience.

From there, the menu expanded to offer additional options that today stand firmly on their own rather than taking precedence over Tetzner’s famous pies. A handful of items include breadsticks with garlic-Hollandaise sauce, meatballs, and breaded chicken wings that are not only well done but a cut above exceptional.

The wings ($14 for five) aren’t greasy and fried, but still have that bite-sized feel. Covered in a thick breading sprinkled with polenta, it’s almost a mini fried chicken meal. They pair perfectly with the heavy sides of herb-flecked blue cheese dressing and Calabrian chili paste-based Buffalo sauce, both with the potential to become so addictive that they could go down the path of cottage industry if bottled and sold.

A dish of the day often completes the savory offerings without pizza. But truth be told, it’s desserts like lemon poppy seed tres leches made with olive oil ($10), accented with Sicilian pistachio, fennel pollen and stracciatella-rich cream, that make it more than your average pizza stop.

Yet customers continue to clamor for the pizza, which was initially only available via online pre-order on a first-come, first-served basis. The hard-to-find nature only fueled Old Greg’s social media feeding frenzy until early fall 2020, when Tetzner stopped taking orders.

In October 2021, after months of hiatus, Tetzner broke his pizza-throwing silence with an Instagram post teasing his new location. Two months later, on December 25, he announced that Old Greg’s would begin operating in “test mode” that night from their new home in Miami. Over the next few weeks, they opened a few weekdays and almost every weekend, announcing the dates and times to loyal followers via Instagram and email.

Five weeks later, and last Saturday’s crowd is a mix of pop-up veterans and a handful of eager newbies, the latter eager to lose the title of “Virgin of Old Greg.” And the queuing, the waiting, getting it here before they sell out is still part of the mystique – and later bragging rights – that comes with being the boss of a Old Greg.

In the world of pizza, loyalty may fall on the classic New York slice, the doughy Neapolitan, the oil-smooth Detroit—even the Chicago deep dish or its alter ego, the thin, crispy “pub” pizza. . No matter the predilection, people from this line came to Old Greg’s to sample sourdough pies priced at $24 to $31 apiece.

Tetzner was quick to say that his pies aren’t Detroit-style (that is, marked by a crispy, cheesy-fried crust). Instead, you’ll get a dough full of ellipsoidal bubbles – like the inside of a freshly baked baguette that’s less dry and more chewy.

While it’s always a good idea to start with the basic plain pie, don’t make the mistake of missing the “OG Roni”. For a crust nearly an inch thick, it’s especially light. A well-grilled bottom gives way to an airy bite, the top covered in a layer of tomato and cheese that oozes over the edge, caramelizing in those extra-crispy slabs just begging to be eaten first.

You can really enjoy the crisp flavor of homemade tomato sauce, the even smother of melted mozzarella, the scent of whole-leaf basil, the gentle warmth of a drizzle of hot honey, and most importantly, a ton of pepperoni. And not just a random sprinkling, but rather a blanket of jerky, each slice cooked in crisp-edged cups, puddles of meaty fat glistening in their center.

Old Greg’s also does round pies.

While the square is what Old Greg’s is best known for, the round is a newer offering. Commercial ovens allow Tetzner’s team to mold their dough into 18-inch round pies which on that day include “Lokal Tatsoi & Tomato”. An expensive choice at $31, it’s a leafy combination of pickled onions, pesto-like garden herb cream, roasted whole cherry tomatoes, and cave-aged cheddar cheese so thick you’d think its weight would fall into disarray disaster in mind.

But that doesn’t happen. The doughy slice seems to defy the law of gravity with a one-handed grip test, enduring a deluge of toppings without even a hint of hollowness.

Both pies offer a taste of what can only be considered incredibly good pizza with one very obvious problem: it’s so painful to acquire.

After almost an hour of queuing at the checkout in hand, is it worth the wait? Most will agree “yes” at least once – especially if they order the wings, at least consider the plat du jour and walk away with a container of tres leches to go.

On this particular Saturday, it’s 6:30 p.m., and Old Greg’s took to Instagram again, posting a statement followers hope to see more often: “Not sold out. No more lineups.” For those who are late to the game today, there is still hope.

All of that may be about to change. In his final Sunday post, Tetzner alluded to the establishment of official hours, speaking somewhat cryptically to NBC6’s Kelly Blanco:

“@kellyblancotv call me tomorrow so we can plan our weird opening announcement. I think we’re ready.”

Either way, it’s safe to say that the lines – and the hype – will persist at Old Greg’s. Whether you decide to brave them is up to you.

(new times made several attempts to reach partners in this story but received no response.)