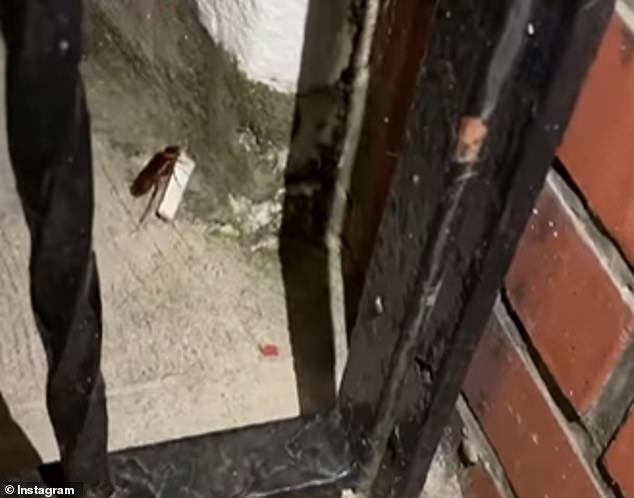 By Matt Mcnulty for Dailymail.Com

Video of a cockroach smoking a cigarette goes viral on social media and gives the ‘Pizza Rat’ a run for his money as New York’s most daring vermin.

In the short clip, the insect can be seen dragging a cigarette butt as it walks away from the person filming it.

By Thursday night, the video had already garnered over 21,000 likes on Instagram.

The video was filmed outside an undisclosed apartment building, according to the New York Post.

Video of a cockroach smoking a cigarette, pictured, is going viral on social media and giving the ‘Pizza Rat’ a run for its money as New York’s most daring vermin

In the short clip, the insect can be seen dragging a cigarette butt as it walks away from the person filming it

‘How dare he! It’s not 25ft from the entrance,’ another commenter joked, referring to the city’s smoking ordinance.

“Gram gawkers had a field day with the sight of this little nicotine fiend,” another wrote.

‘How did you find this video of my ex?’ commented a third person.

Before the Smoking Roach, there was the Pizza Rat, which captured the twisted hearts of some New Yorkers when it was filmed sneaking down a subway stairwell.

Then there was Bagel Rat. Donut Rat even made an appearance one day.

A rat was spotted carrying a salad bowl along subway tracks in February 2020.

In the footage, the rat is seen dragging the bowl along the rails with its mouth.

He then takes a short break from his workout before resuming the healthy meal.

“Shout out to Salad Rat, stubbornly sticking to her New Year’s resolutions until February,” Sarah Peele tweeted as she posted the video to social media.

People took to Twitter to praise the rodent’s persistence in starting 2020 in a healthy way.

‘Why can’t I be more like Salad Rat?’ one person tweeted with a video of him eating a slice of pizza.

Others expressed mock dismay that health modes had reached as far as the rat’s humble abode in the city’s basement.

Before that, there was the infamous Pizza Rat, which went viral in 2015.

Pros and cons of debt consolidation

How To Choose The Best Personal Loan Lender