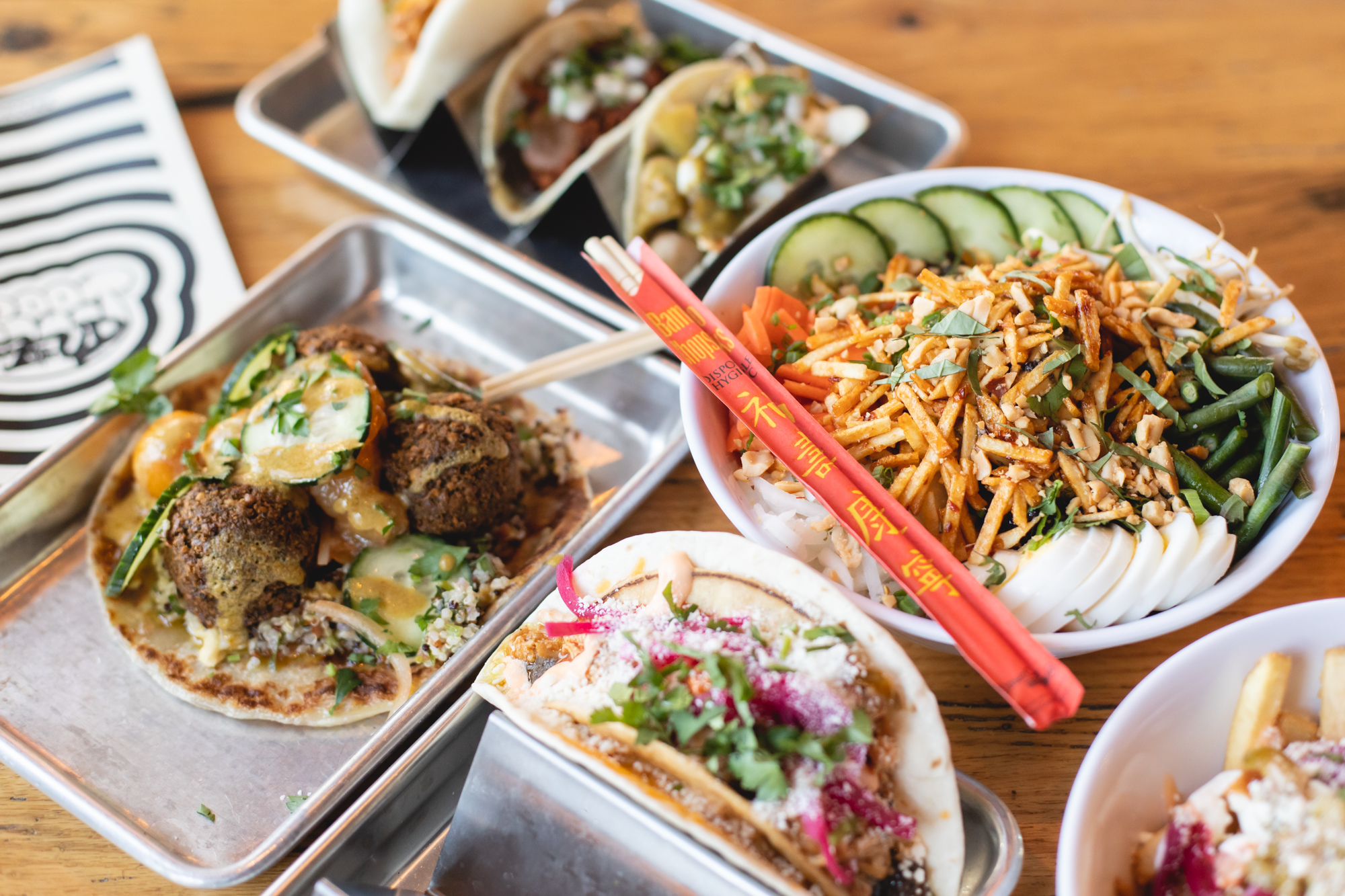 On December 22 of last year, Street Feud opened in its first standalone location in East Colfax. After a stint at Avanti Denver — which lasted from August 2019 to March 2020 — the concept finally resurfaced in a fully-appointed renovation of what was once the Solera Restaurant and Wine Bar. Amidst boomboxes, Nike Dunks and a wall-to-wall overlay of iconic memorabilia spanning a decade, Chef Merlin Verrier has crafted an international amalgamation of street food suitable for the most discerning palates. It’s a place to snack well and feast fancy, with tacos, wraps, buns, fries, bowls and drinks arriving from all corners of the globe. These are corner dishes, all presented with great technique and an obvious penchant for joy.

Verrier’s extensive culinary journey makes it clear why food is so universally delicious. Growing up in Santa Cruz, the chef was exposed early on to the abundant “crazy ingredients” that sprout all over town. With a diet of Mexican food and his mother’s Indonesian cooking, he quickly developed a taste for good things, and a kind of culinary fluency akin to the linguistic fluency of children raised in multiple languages.

After moving to Boulder at age 19, Verrier began to take the prospect of becoming a professional chef seriously. He attended the Western Culinary Institute before moving to Summit County to work in some of the area’s finest hotels and kitchens. “I always realized that I could travel anywhere in the world and still have a job,” Verrier said. In 2005 he started working in Rioja, becoming the sous chef in less than a year.

After moving to Chicago in 2008, Verrier began working under celebrity chef Graham Elliot at his namesake restaurant. This time, it only took him two weeks to be promoted from hot app station to sous chef. “I had something to prove to myself,” Verrier said, noting that he recently quit drinking alcohol. Working on a variety of Graham Elliot concepts, Verrier acted as culinary director for Lollapalooza from 2010 to 2018 – serving lobster corn dogs to crowds of festival-goers and providing custom meals to Eminem, LCD Soundsystem, Arcade Fire and The Foo Fighters. . The fact that several establishments of the catering group have received Michelin stars under his leadership is also worth mentioning.

While the dishes certainly shine with their originality, Verrier insists that his method is rooted in respecting the ingredients and techniques of cultural antecedents. The tacos are all robust affairs, with the usual suspects like chicken, fish, and lamb all arriving elegant and unfussy. Although it is the mushroom taco ($5.25) – with eightlacoche beans, salsa roja, onion and cilantro – which may steal the show, as the mushroom has been converted into something more like crispy chorizo. The bowls, especially the Indonesian noodles ($14.50) – with chicken, peanut sauce, hard-boiled eggs, fresh herbs and spiced thin potatoes – are a good reminder to avoid the easy mistake of equating snacks with junk food. Items like the kimchi quesadillas ($11) — with mixed cheeses, kimchi, cheese sauce, salted cream and green onions — are a good example of Verrier’s cross-pollination ability. “I was lucky enough to be able to make the food good,” smiles the chef. The fact that there is only a limited drinks menu was intentionally designed to make Street Feud feel like a safe space for adjacent sober and sober patrons.

Everything about Street Feud shows a deep appreciation for the up and down and the inevitable brilliance that comes from appreciating and layering extremes. Verrier has had plenty of time to show off his talent and Street Feud lets him have some fun with his obvious talent. It’s a truly enthusiastic coalescence, which only looks scattered or hectic to the untrained eye.

All photographs by Adrienne Thomas.