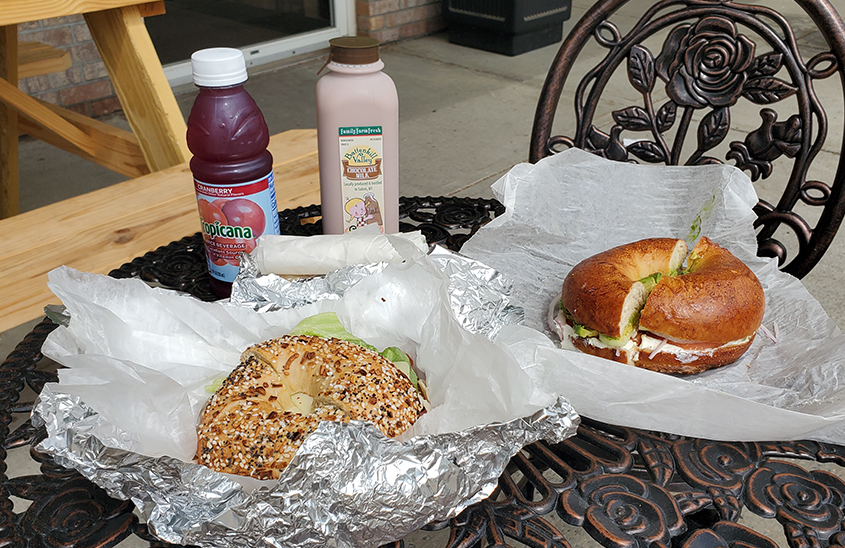 MALTA — Have you ever eaten something so satisfying that you wish you could start all over again as soon as you took the last bite? That’s how I felt about my Twisted Bagel sandwich at Price Chopper Square here. The restaurant opened in August 2021.

I heard about the Twisted Bagel from my niece Ann Marie, who knows her bagels. A Long Islander like me, she worked as a teenager at this sanctuary known as Seaford Hot Bagels.

She had texted a picture of their gorgeous breakfast sandwich. A cooked egg, a thick sausage patty and melted cheese were piled on top of a crispy bagel.

“I went to the bagel shop in Malta and I eat out,” she said, then sent half a dozen pictures of bagels.

So I had to see for myself. Sheryl and I visited recently and came away very happy.

Twisted Bagel is in the mall not far from the excellent Jimmy’s Pizza. It’s an unassuming, glass-fronted store with a few tables in the front. The best part is inside.

It’s small and tidy, with just a waiting area and a few stools at the window counter. Straight ahead of you are the goods: a multitude of bagel varieties, both old favorites and fresh, cheeky interpretations. We moved closer to see better.

In addition to old friends like everything, poppy seed and cinnamon raisins, that day they had French toast, blueberries and cheddar jalapeño. They even had egg bagels, which I don’t see often, and gluten free.

Twisted Bagel is open for breakfast and lunch, and that’s what’s on the menu. You can get a standard breakfast sandwich with two eggs and cheese ($3.95) or a hand-formed burger with cheese, bacon, and all the trimmings ($9.25).

We had come for bagels and had completely overlooked the salads and desserts. Sorry. But they have them.

Drinks are in the large cooler with the sliding glass doors. Help yourself. They get points for carrying Battenkill Creamery chocolate milk ($2.25). You can get your fix of coffee, tea and hot chocolate (all $1.25), soda, juice and water.

The ingredients were assembled on a sliced ​​egg bagel with such care and symmetry that it seemed like a shame to top it.

“I might have to eat it all,” Sheryl said, looking down at the huge sandwich. “The seasoning does it,” she added between bites.

“I like the onions to be cut really, really thin,” she said. “If it wasn’t, I’d take them off.” Instead, she enjoyed them.

“It’s good,” she said, an understatement as she was already working on the second half. I thought, looking at my own sandwich, that I was never going to finish.

Their tout bagel is good enough to eat on its own, like a soft pretzel. I had a club sandwich ($9.95) on one; it was just one part of a sandwich made with excellent ingredients.

I nibbled on the turkey that was hanging off the side. It was very moist, with a solid turkey flavor. Next, the ham. “They use good deli meats,” I told Sheryl.

A slice of sharp cheddar was just enough, and their bacon was charred around the edges and a little greasy. Together the toppings made for one of the best sandwiches I’ve had. Lettuce and tomato were standard. I sautéed the onion and cream cheese.

Their fresh bagels are soft on the outside and chewy on the inside, and they don’t contain too much bread for a sandwich. They are quite resistant when you bite; when you reach inside, you realize that a bagel makes the best sandwich bread ever. At least at Twisted Bagel.

They taste a bit sweet and a bit rich. A southern bagel is chewy, substantial and heavy, even on the inside. They are best eaten grilled. Here, the bread part is as tasty as a bakery bun. It even smells like one. And it works like one.

Pay attention to the toppings. The garlic was toasty and crunchy, as was the onion, and most importantly, there was just enough salt in the mix. Add sesame and poppy, and you have it all.

I had started the second half of my sandwich. Sheryl’s was missing. She relished the Battenkill Creamery chocolate milk. I started taking smaller bites of my sandwich to stretch it out.

“Do you want to smell the pickle? asked Sheryl, who knew I knew. I won’t eat it, but I will rate it by the smell, and this one was good. She also liked the homemade macaroni salad. “That pickle was good,” she said.

We were enjoying our seats in the sun and quietly people watching. I reluctantly put the last piece of sandwich in my mouth.

We cleared our table and entered. Twisted Bagel adds a 4% surcharge to credit card orders. So one way of looking at it is that you get a discount if you use cash. I would prefer to see the 4% built into the menu price, but I understand why they do it.

We each brought half a dozen home and had fun choosing them. I have everything, salty and plain. Sheryl has jalapeño cheddar for Frank.

“Two thumbs up,” she later texted. “Frank just had a bagel and said it was so good.”

So, bottom line: Twisted Bagel is the merchandise. But their bagels skew the sandwich style. So make yourself a sandwich. And take home some bagels for later.

Caroline Lee is a freelance writer living in Troy. Join her at [email protected]

More from The Daily Gazette: