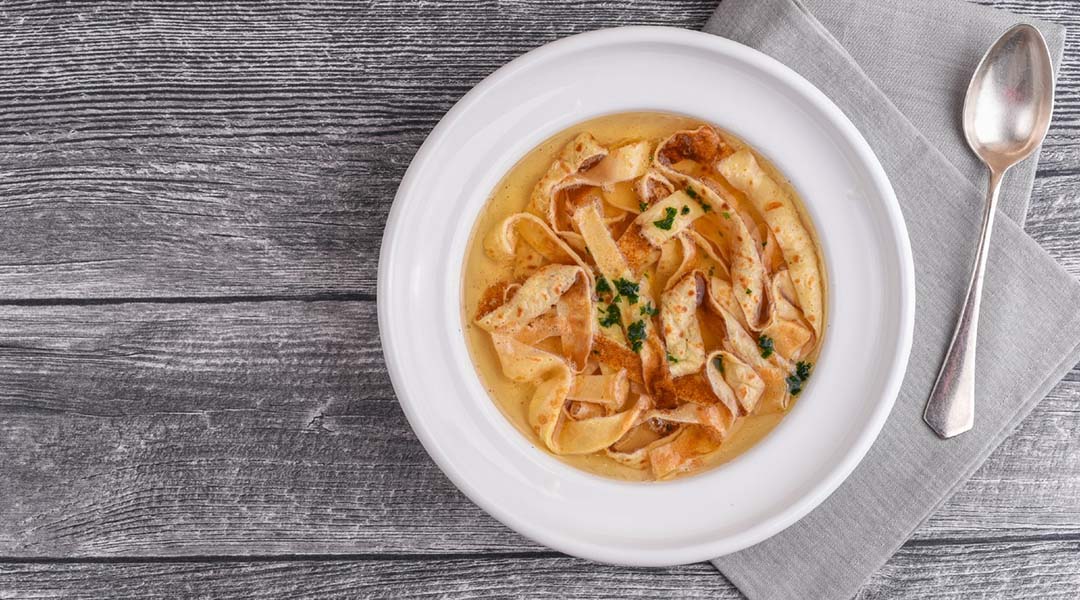 These Passover Pancake Noodles Are Better Than Matzah Balls

This article first appeared on The Nosher.

Last April, when the pandemic was raging in my area, I opened my front door to my dear friend Natalie, who literally threw a plastic sandwich bag at me from afar containing the darling Passover tradition of his family: flädla.

Lesser known than the universally beloved matzah ball, these Passover egg noodles are made from a thin pancake that is rolled up and cut into strips, over which a steaming broth is poured. Natalie’s family recipe was passed down from her mother’s aunt Ilse, who emigrated from Germany in 1939 after Kristallnacht.

Read up on flädla and, like the story of any good noodle, you’ll find that the subject covers a lot of ground. Flädla, also spelled flädle, did not start out as a Passover food, but evolved into a dish that reflected the ingenuity and frugality of Eastern European Jewish cooks, who processed the leftovers of batter or pancake noodles.

Noodles were an important part of the Ashkenazi diet. In medieval times, Europeans began boiling dough in water rather than baking or frying it. In the Encyclopedia of Jewish Food, Gil Marks writes that the noodles were mainly used in soup, and that some cooks cut matzah flour blintzes into the liquid. No name has been assigned to this noodle or this dish.

Passover noodle recipes are included in many Jewish cookbooks, including June Feiss Hersh’s recipe compilation of Holocaust survivors titled Recipes Remembered: A Celebration of Survival, illustrating how deeply ingrained the dish was. in people’s memory. Sometimes called lokshen, the Yiddish word for noodles, the recipes use matzah flour or potato starch, and always the same method of frying a thin pancake and cutting it into strips.

Identifying when, where and who adapted these noodle ribbons for the holidays is a challenge. “What fascinates me most,” says Gaby Rossmer, co-author with her daughter, Sonya Gropman, of The German-Jewish Cookbook, “is how these food traditions spread. They follow routes. You can see it, but you can’t tell exactly which came first, which came second.

Many Jews, like Natalie and Rossmer’s ancestors, lived in southern Germany; in the Swabian region pancakes are known as flädle. The recipe has been passed down from generation to generation; tradition dictates that pancakes should be thin and crispy. Flädlesuppe was a popular dish, but “never for Passover,” says Rossmer. She was one year old when she came to America from Bavaria, but remembers fondly that she frequently fried flour pancakes with her father; the goal was always to have enough to make flädlesuppe.

Noodles are a key component of a comparable and popular Austrian soup called frittatensuppe, or pancake soup, which is always made with beef broth, says Nino Shaye Weiss, blogger at JewishVienneseFood.com and Jewish Food Guide to Vienna. There, pancakes are called palatschinken; cut, they are called frittaten. “Jews apparently love them because they can’t live the eight days of Passover without them,” he comments, adding that frittaten for Passover are simply known as Peisachdike lokshen (kosher for noodles from the Passover).

Legend has it that the frittatensuppe may have originated in 19th century Austria to feed Austrian, French and Italian diplomats meeting secretly at the Congress of Vienna. One participant was Conte Romano de Frittata, whose coachman prepared the pancake. Frittata comes from the Italian word friggere, to fry; perhaps suggesting that the dish bears the name of the coachman’s employer. However, the only similar Italian-Jewish recipe I could find was for Minestra di Sfoglietti Per Pesach, a soup containing noodles of cooked dough, in Edda Servi Machlin’s The Classic Cuisine of Italian Jews. If the story is true, the dish did not return to Italy.

Cécile Gruer, 86, a Holocaust survivor, is known as the head of her family. She fondly remembers eating flädla in 1946 during the first Passover she celebrated with her family in an Austrian displaced persons camp after their reunification. As a teenager, she watched her mother prepare the noodle as her mother had done in Hungary. Greuer makes flädla year-round, using potato starch, matzah flour, or quinoa or almond flour for gluten-free parents. Sometimes she just mixes eggs and water, basically an omelet. Gruer suggests adding any herb, such as dill or cilantro, to enhance the flavor of the soup. She carries on these traditions because, she says, “you don’t want to break the chain.”

Gruer’s and Natalie’s families enjoy their flädla in chicken broth with matzah balls. The Lubavitch sect, which follows the custom of gebrokts and does not eat any dish where the matzah can touch liquid, only has the noodle in its soup, says Leah Koenig, author of The Jewish Cookbook. Gruer says she doesn’t like chicken soup. How does she eat her flädla? She laughs. “I would have it on the plate!”

Skinny Pancake gets a warm welcome in downtown Albany

Start your day with a decadent bowl of pancake cereal